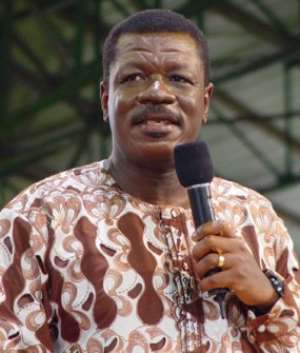 His invitation attracted a loud roar from the members of the congregation, who were pleasantly surprised by the unusual gesture of their leader.

This was during the October edition of the church's special monthly communion service, which is held on the last Tuesday of the month.

When The Mirror visited the church on Wednesday, October 30, a person who pleaded anonymity confirmed the occurrence but refused to give details.

Pastor Otabil was however not available to comment on the issue but The Mirror got a recording of the event from the church's bookshop.

Preaching on the topic; Relationships, Pastor Otabil referred to the current economic challenges, not only in Ghana but around the world and said that the church must meet the needs of its members, spiritually, socially and materially.

He said times are hard but he did not expect members of his church and Christians in general to be so broke that they cannot pay their utility bills.

'I believe with all my heart that the solution to every church member's problems is within the church. The church is more efficient than any human organisation on earth…than any social programme…than any cooperative system but we have to be honest,' he declared.

'Those who have will give and those who need will take, as was done in the early church,' he said and directed the ushers to put the offering bowls in front of the congregation.

After they had been filled with cash by those who had money, he invited the congregants who were HONESTLY broke to come forward and take some money.

He however cautioned the needy members as they grabbed money from the offering bowls, not to be greedy but remember other poor members of the church, who had not had their turn.

'Don't take all for yourself, but remember others in order not to kill the spirit of the church'.

'Be truthful to yourself because God knows your heart and we trust that you will take what you need and remember you are taking for your daily bread as is said in the Lord's Prayer and not for your weekly, monthly or yearly bread,' he said.

He explained that he had not planned the gesture but just felt the need to do it based on directions in the Book of Acts Chapters two and 11.

He was however unhappy that some members of the church were not honest during past charity programmes.

He recounted an earlier incident where the church organised a charity activity for pregnant women, 'And there were people who came in to fake pregnancy in order to benefit from the programme'.

'I am not saying this to shame anybody but to let you know that we cannot have the spirit of generosity operating within dishonesty,' he lamented.

He advised the people to be honest so that those who are generous do not feel that they are being cheated.

Pastor Otabil reminded Christians that they were not just members of churches but members of the body of Christ.

'It is, therefore, important to have a relationship with Christ, with each other and thus enrich our walk with God,' he pointed out.

The Mirror also learnt that as part of its social responsibility, the ICGC contributes about GH¢5,000 monthly to support the treatment of children with heart diseases.

The church has also built a residential facility for the children at the Osu Children's home and supports some schools in the Abbosey Okai area to improve teaching and learning. Currently, the church owns and runs the Central University College.