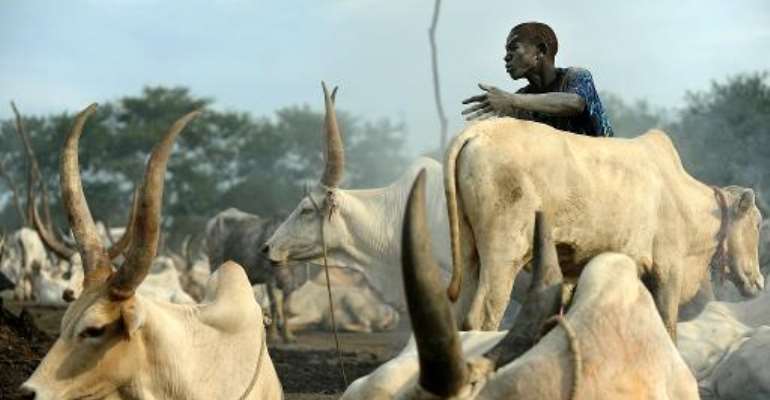 A herdsman from the Dinka tribe at a cattle-camp near south Sudan's town of Rumbek on November 13, 2011. By Tony Karumba (AFP/File)

Only one of the two ethnic groups living in the area voted in the poll, which is not recognised by either Khartoum or Juba and which the African Union has warned is a "threat to peace."

The fate of Abyei is one of the most important and sensitive issues left unresolved since South Sudan became an independent state in 2011, ending two decades of civil war in Sudan.

"The referendum committee has announced the results, and the number of people who have chosen to become part of South Sudan is 99.9 percent of the vote," Luka Biong, spokesman for the Abyei Referendum High Committee, told AFP.

Celebrations including dancing and music broke out after the results were announced, he said.

African Union chief Nkosazana Dlamini-Zuma has said the vote was illegal and its organisers risk sparking a return to war between civil war foes in Juba and Khartoum.

"They pose a threat to peace in the Abyei area, and have the potential to trigger an unprecedented escalation on the ground... with far-reaching consequences for the region as a whole," she said in a statement on Monday.

Only 12 voted to be part of Sudan, a number vastly outweighed by even the 362 spoiled ballots, Flatman said, adding that initial observations suggested a "very transparent process".

Patrolled by some 4,000 Ethiopian-led UN peacekeepers, the area is home to the settled Ngok Dinka tribe, closely connected to South Sudan, as well as the semi-nomadic Arab Misseriya, who traditionally move back and forth from Sudan grazing their cattle.

Only the Ngok Dinka voted -- although organisers insist it was open to all residents -- and the Misseriya have already angrily said they will not recognise the results of any unilateral poll.

"The people are celebrating, there is dancing and music, and the nine chiefs of the Dinka Ngok are marching, they will sign a declaration of committment to join South Sudan," Biong added.