Farmers sensitized on biotechnology in agriculture 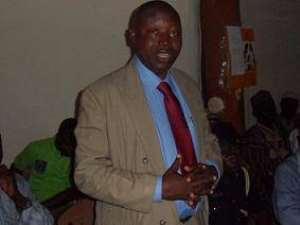 Mr Bede Ziedeng
Tamale, Oct 30, GNA - Some farmers in the Northern Region have been sensitized on the need to embrace and apply biotechnologies in their farming activities to enable them overcome the challenges of poor harvest.

Biotechnology is the application of scientific techniques to modify plants and animals to obtain improved varieties.

Speaking at the sensitization workshop in Tamale Mr Bede Ziedeng, the Northern Regional Minister said 'There is no doubt that technology holds the key to increased productivity in agriculture and it is capable of enhancing our efforts to overcome the hunger gap.'

It was organized by the African Agricultural Technology Foundation in collaboration with the Council for Scientific and Industrial Research and the Open Forum on Agricultural Biotechnology (OFAB - Ghana) on the theme: 'Modern agricultural technology: a tool towards food security in Ghana.'

Mr Ziedeng said the country's population kept rising but the land area for agricultural production remained the same, a situation which called for a rethink of farming practices to leading to increased yields to ensure food security.

There was a presentation on modern agricultural biotechnology, which suggested that challenges of farmers such as weeds, pests, diseases, poor quality soils, inadequate irrigation, amongst others could be addressed through biotechnology by developing drought and herbicide tolerant varieties.

Dr Ottah Atikpo said this underscored the need to create the awareness amongst farmers who were major stakeholders to ensure that they participated responsibly in bringing about food security, improve farmers' profits as well as attain the Millennium Development Goals.

Mr Hanan Gundadow, Tamale Metropolitan Chief Executive, appealed to all, especially farmers, to partner with the metropolis to design innovative ways to improve agricultural production which is the mainstay of the residents.

However, some farmers continued to express scepticism about biotechnologies in agricultural production saying it might cause the extinction of local seeds, which would force them to buy new seeds at exorbitant prices.