Vaccination against polio begins in Yendi 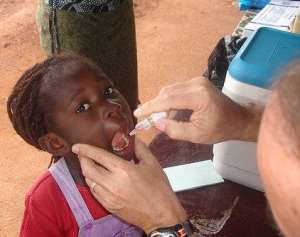 Yendi (NR), Oct 30, GNA - The national immunization exercise against polio has  taken off in the Yendi Municipality of the Northern Region.

The three-day exercise targets about 33,000 children below five years in 263 communities in the municipality.

As part of the exercise, children between six months and 59 months will also receive doses of vitamin A capsules.

Speaking at a stakeholders' meeting on the immunization exercise at Yendi on last Thursday, Mr Awuni Mbabila, Yendi Municipal Disease Control Officer said 167 health officers and volunteers, and 33 supervisors had been deployed to undertake the exercise.

Mr Mbabila said the personnel would move from house to house, schools, markets, and lorry parks among other places, to immunize all children, who fell within the targeted age group in the municipality.

Mr Mbabila said last year, over 33,000 children were vaccinated against polio in the municipality and commended parents and other stakeholders for the success chalked.

He appealed to parents to cooperate with the personnel carrying out the exercise because repeated doses of the polio vaccines were safe, he said, adding that a child needed between 10 and 15 doses to be fully protected.

He reminded parents that polio paralyzed children for life and hence the need for the exercise.

What's So Special About NAM1 That Akufo-Addo Is Shielding Hi...
24 minutes ago