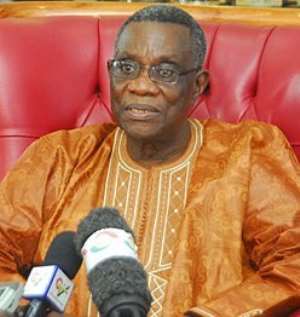 Until his timely or untimely death as one may see it, I personally thought John Fiifi Atta Mills was the worst ever president of Ghana. This stems from his lust for power after his third term bid, and the high crass of incompetence displayed at the presidency between January 2009 and July 2012. In fact, I was never a writer, but I must confess that Mills' maladministration was a major motivator for most of my articles. In his first year in office as president, Mills's performance was seen by many a Ghanaian as 'slow-paced", but Prof. Mills argued that he was sure of delivering on his promises. To him, he was "Slow but sure".

Indeed, Prof. Mills failed miserably as a political leader, judging from his inability to fulfil most of his major campaign promises such as the STX Korea housing deal, one-time premium, the Eastern and Western Corridor roads, a reduction of fuel prices drastically etc. He also failed to take control of his wayward appointees like Koku Anyidohu, Okudzeto Ablakwa, Kobby Acheampong, Bissiw etc. However, credit must be given to the late Mills for his resolve to keep former president Rawlings at a far distance.

Admittedly, Prof. Mills must be excused from too much blame because of his age and level of his fitness during the time. For, it was an open secret that the man was battling with cancer, though his advisors pretended he was as fit as a fiddle. Seriously, if a comparative analysis was made between Mills and Mahama, especially in the area of political opportunities, the former must not be blamed too much for his poor delivery. This is because, Mills was never born a politician, but a fine academic plucked from obscurity by J.J. Rawlings to partner him in the 1996 general elections. For example, Mills neither contested any national elections nor represented his constituents in Parliament. Besides, he never had the privilege of being a substantive minister of state or deputy. He was not even known within his own party, the NDC.Thus politically, Mills was a green horn until his appointment as the Vice President and this is a fact that cannot be disputed by any Ghanaian.

But, unlike the late Mills, John Mahama was born into a political family. His father, a former Parliamentarian and Minister of State made sure his son enjoyed free education from kindergarten to the university level at the expense of the poor cocoa farmer. John Mahama represented his constituents in parliament on three occasions (12 years). This was against the backdrop of his appointments as a deputy minister and substantive minister of state between 1997 and 2001. In his own words, John was the luckiest ever Vice President in the world, because the sickly and aged Prez Mills gave him every opportunity and left the governance under his care.

It is thus difficult to fathom why John Mahama is struggling to find his feet as the leader of Ghana. Does the country lack natural resources or competent personnel to manage them? Has the problem got to do with his leadership style or competence? Are Ghanaians not being corporative with his government? How could John Mahama fail Ghanaians or give excuses, when he was fully aware of the socio-economic problems bedevilling the country before he took over?

Since time immemorial, Ghana's economy has been dependent on our agricultural and mineral resources - cocoa, gold, timber etc. The prices of these commodities at the world market have been appreciating steadily every year. The construction of the Akosombo Dam was meant for the country's industrial take-off. Fortunately for us, oil was struck in commercial quantities in 2010. To the NDC Communicators, loan acquisition is an unprecedented achievement, hence the use of our oil revenue as collateral to secure $3bn China. Notwithstanding the above, direct and indirect taxes have been increased at gargantuan levels. And whilst new taxes have been introduced - airport, Akpeteshie, environmental taxes, the tax net has been expanded to cover many businesses and individuals in Ghana. The least said about utility tariffs, the better. For water, electricity, gas and fuel have all been increased by over 200% since 2009. Surprisingly, whilst the National Debt has been increased from GHC9.5bn in 2009 to GHC43.9bn in 2013 (within 5 years), there is very little to show in terms of infrastructural development and investment. The Suhum-Apadwa portion of the Accra-Kumasi road, the Sofoline interchange, and over 5,000 units of Affordable Houses have all become white elephant under a Better Ghana era.

A Presidential Palace was constructed to accommodate the president and his family; a Presidential Jet has been purchased for his travels; and all social programmes - national health insurance, capitation grant, national youth employment, mass spraying etc were being operated fully before the NDC took over. All government vehicles and bungalows in the hands of individuals were seized, sensitive positions have been filled with Mahama's preferred appointees. The salary of the president, John Mahama has been increased from GHC5,000 per month to GHC12,000, not forgetting salaries and allowances of his 88 ministers and deputy ministers.

From the foregoing, it cannot be easily understood why Ghanaians should be immersed with abject poverty. Prior to the last general elections, we were told that Ghana's economy was the fastest growing in the world, and the inflationary rate low and stable, that is, single digit. The publication of a Green Book highlighted the government's "achievements", and this culminated in the catchphrase, "Advancing the Better Ghana Agenda".

How then could an "Advancing Better Ghana" Agenda be in "first gear", Mr. President? Today, there is so much corruption in the system and every Tom, Dick, and Harry believes it is their turn to steal. The GYEEDA report speaks volumes of this particular government, but the president, who has admitted openly that danger lurks on any decision he makes, has no balls to act. This is due to his involvement in the plane purchase in Brazil and the Armajaro Cocoa deal.

For the first time since 1992, this government did not increase the price of cocoa for our farmers. Their bonuses too have not been paid in the last two years. Ghana's education is in tatters as teacher trainee allowance has been scrapped and a ban placed on teacher recruitment. Parents have been asked to pay GHC1,500 as admission /school fees for their wards in senior high schools. Prices of goods continue to escalate at the market. Unemployed graduates flood the market every year because of the ban on public sector employment. The incessant worker agitations give clearance to the fact that Ghanaians are truly going through serious economic hardships.

It therefore beggars belief how John Mahama has maximised the vast political experience, and the opportunities put at his disposal over the years. For me, John Mahama has been more of a "curse" to Ghanaians than a blessing. A competent leader, according to John Pershing, can get efficient service from poor troops, while on the contrary, an incapable leader can demoralise the best troops. But, a critical observation of the economy shows that Ghanaians are unlucky to have both an incapable leader and poor troops at the same time for the country's "economic war". Mahama has no clue about governance, and no matter the number of years he stays in office, Ghana cannot move forward economically. Mahama's only ambition since infancy, has been to be called "President John Mahama". This, he has successfully achieved through the mysterious death of Prof. Mills, profligate spending, and bribery of Afari Gyan and his Electoral Commission.

As one woman put it, the name Mahama simply means "Maha man", to wit, I have destroyed this nation. I therefore take this opportunity to apologise unconditionally to Prof. Mills for all my criticisms of his administration, for I never knew after him, there could ever be such a clueless, incompetent, and corrupt leader to rule our beloved country again. But regrettably, John Dramani Mahama of NDC has proven me wrong.