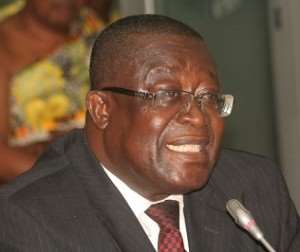 A meeting organized by the National Democratic Congress (NDC) at Mpraeso, the capital of the Kwahu South District in the Eastern Region to throw light on government policies and projects came to an abrupt end last Sunday, after a fight  ensued between the youth in the constituency and the Constituency chairman, Mr. Emmanuel Atta Obeng.

The latter was alleged to have insulted one of the executives, Mr. Stephen Ahadzi, a Ward Chairman at Kwahu Adowso, resulting in the confusion.

The conveyers of the meeting, including party bigwigs such as Mr. Antwi Bosiako, Deputy Minister for Employment and Social Welfare, Mr. Mark Acheapong, Board Member of the Fisheries Commission, Mr. Anthony Gyampoh, Eastern Regional Secretary of the party and Mr. Joshua Atta Mensah, Eastern Regional Director of Ghana Youth Employment and Entrepreneurship Agency (GYEEDA) became speechless as they watched the executives punch each other in a real show of fisticuffs.

Narrating what led to the fight, Mr. Stephen Ahadzi said they (constituency executives) were asked to rent plastic chairs for the meeting at the expense of the constituency, but he (Ahadzi) quickly rejected the idea.

According to him, he raised the objection because money was given to the chairman sometime ago to purchase the plastic chairs but he misused the money.

According to Ahiadzi, he argued at the meeting that since money was given to the party to purchase the chairs, it did not make sense to buy chairs from the account of the party.

The Ward Chairman alleged that his comment did not go down well with the constituency Chairman who started insulting him and this triggered the anger of the youth.

According to Mr. Ahadzi, the youth at the meeting did not also take kindly of the posture of the chairman who could have demonstrated some amount of maturity irrespective of the level of provocation to address the situation. They, therefore, pounced on him and beat him mercilessly.

The paper was further told that Mr. Kwasi Louis, Deputy GYEEDA Director of Kwahu South District was also at a receiving end when he tried to stop the youth from beating the chairman and sustained various degrees of injury.

He has since been hospitalized at the Abetifi government hospital and receiving treatment as at the time of filing this report.

Confirming the story and the admission of Kwasi Louis at the hospital to The Chronicle, the Eastern Regional Director of GYEEDA, Mr. Joshua Atta Mensah, expressed grave concern over the incident and described the situation as unfortunate.

According to him, the meeting was one of series of a nationwide campaign put together by the leadership of the party to explain government policies and projects to party members as well as giving them the opportunity to voice out their problems.

Mr. Atta Mensah told this reporter that the delegation was earlier at Abetifi where they had a very successful meeting with the members, but the meeting at Mpreaso took a belligerent posture, leading to the beatings and swelling of faces.

The meeting, however, came to an abrupt end since all attempts by the delegation to prevail on the charged youth to calm down was unsuccessful. When contacted for his side of the story, the Constituency chairman, Emmanuel Atta Obeng confirmed that he was indeed beaten, but declined any further comment.