No, Abongo Boy, That Is 'Soldier Power' And 'Barracks Talk' 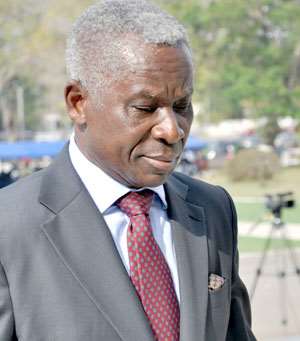 'Every Tom, Dick and Harry gets up and is calling for a strike.  If you don't want the job, Ghana is not a police state, take your passport and get out of the country.  If you can't sacrifice like what some of us have done, then get out.  If the kitchen is too hot for you, get out. If anybody goes on strike, he should not be paid. ' - Brigadier - General Nunoo, National Security Advisor.

In fact, serious investors will not invest in a country where the National Security Adviser admonishes its citizens to get their passports ready and 'get out' if their salaries are not good for them?  And if the people leave the country where will the investor get labour; one of the factors of production? The seriousness of was the broad smile the President was wearing when the old and retired ex-service man was making the pronouncement.  Where I come from, our elders say when you dance to the tune of a drum beaten by a mad man, then you have your type of madness in your stomach. Does this yesterday's man know that the difference between the employer and the employee is not like the one between the master and the slave?  Come on Brigadier- General, you too go wey you!!!

For the sake of the younger generation who were born too late to know the real Nunoo-Mensah, I will like to travel down memory lane.  In 1991, the IMF subtly forced Rawlings and his PNDC to conduct a referendum in this country.  The question was simple:  Do Ghanaians want to remain under a military rule or a democratic dispensation? The result was an overwhelming vote for democratic dispensation.  In fact, more than 90 percent of Ghanaians voted for democracy instead of a military regime.  Way back in January 1982, barely two months into the PNDC regime, Brigadier Nunoo-Mensah travelled to Nigeria on official duty and when a journalist asked him whether Rawlings will hand over power or not, this is what he said: 'Hand over to who?' The cheek of it!!

When the ban on party politics was lifted and Rawlings founded the National Democratic Congress, Brigadier Nunoo-Mensah joined them.  He defected later to secretly join the NPP and contested the parliamentary seat at Awutu-Effutu-Senya constituency on the ticket of the NPP. In 1998 when the campaign for the flagbearership race of the NPP started, Nunoo-Mensah was the Campaign Manager of Nana Addo Dankwa Akufo Addo. During the 2000 electioneering campaign we saw the face of Brigadier Nunoo-Mensah at NPP rallies and he participated in all activities, wearing NPP t-shirt with a cap to match. His voice could be heard clearly shouting 'Kukrudu, Eshie Rado, Rado, Rado' as he stood on the dais.  When eventually Kufuor won the presidential election, Brigadier Nunoo-Mensah started lobbying for a position in government.  After waiting for some time with nothing coming his way, he defected to join the NDC one more time and has remained there since. His reward for betraying the NPP is the appointment he is holding today.

Just watch his face carefully and you will notice the face of a master traitor. The man has portrayed throughout his political career that he is not trustworthy.

As Chief of Defence Staff in 1959 Brigadier-General Nunoo-Mensah told us he was being paid $1000.00 and yet he is telling us that he sacrificed for the country. The folly in the statement is that the man did not tell us how much he is receiving today as the National Security Advisor.  If somebody was receiving $1000.00, 54 years ago and a medical doctor is receiving less than $1000.00 today and such a person is telling us that he sacrificed for the nation, then I am sorry to say, something is wrong with 'his thing'.  And did I hear him telling Ghanaians that he had experience working for the CIA and other intelligence agencies?  How much was he receiving from the CIA as a secret agent? It has been revealed that the CIA played active role in the 1966 coup which toppled Dr. Kwame Nkrumah.  Will Nunoo-Mensah do us a favour and tell us the role he played to facilitate the success of that coup which sent the clock of progress ticking backward? Did he pass government classified information to the CIA? Somebody should tell this reckless old man that operatives of the CIA,  like their counterparts in the MOSSAD, FBI, M16, KGB, Shin Bet etc. do not open their mouths so wide like a fish out of water.

The gospel truth is that this retired Brigadier-General is living on past glory.

Brigadier-General Nunoo-Mensah has treated Ghanaian workers with contempt and he must be paid back in his own coin.  In fact, Ghanaian workers should treat him with disrespect. Calling for his resignation is like throwing a stone at an elephant, simply because the President supports the statement.  The President could have distanced himself from the statement when he took his turn to speak at the function if he did not support it.  If an octogenarian like Nunoo-Mensah is asking Ghanaian workers who think their salaries are not enough to pick their passports and leave the country, there is no difference between such a person and the NDC serial caller. And he calls himself National Security Advisor!  Does the old soldier know that even the President of this country cannot instruct those who think the kitchen is too hot to pick up their passports and 'get out'?  The irony of this irresponsible statement made by this boisterous octogenarian is that the President who was giggling while Nunoo-Mensah was making the absurd statement had confessed that times were hard and that, things will be good next year.  And yet, there he sat on the dais, smiling broadly as if he had seen the testicles of his father in-law, while the old man made a mess of himself.  Ah, maybe he was smiling at the absurdity of the one-star General.

Listen to Brigadier Bombastic again:  'No one should be allowed to destroy this country.  My wife thinks I am crazy with all the money I am spending in building schools and all.' So you see, if some of us also think like his wife, we are very right.  After listening to Brigadier-General Nunoo-Mensah, I thought he was under the influence of alcohol. Two tots of Akpatashie can daze an octogenarian like Nunoo-Mensah.  Or maybe he was possessed by the devil. And if that is the case he should seek the services of an exorcist.

Amaliba's Infantile Analysis
'If anybody thinks that electricity is very expensive to consume, they should resort to buying candles and see how it is' - Mr. Amaliba, NDC sympathizer.

Anytime I visit Accra, I will have to take time off and visit the Cardio Centre at the Korle Bu Teaching Hospital because these days I experience some unusual heartbeats anytime I listen to these NDC apparatchiks.  How can a whole lawyer speak like this?  We were using lanterns and candles until Dr. Kwame Nkrumah's CPP built the Akosombo Dam to generate electricity.  Nearly 60 years after the construction of the dam, a lawyer/politician is asking us to use candles if we think electricity is expensive.  Do we need Amaliba to tell us that as compared to candle, electricity is expensive?  What have we done to deserve all these insults from upstarts like Amaliba?  If this man thinks he reserves the right to poke his finger into our nostrils he should remember that we can also spit into his nostrils.  What has gone into the brains of these people? Is it swollen headedness or sheer disrespect to Ghanaians?

When the country faced serious electricity problems when the Akosombo Dam was in critical stage due to low volumes of water, the NPP government did not tell us to use candles.  The Kufuor government imported generators while negotiation was underway to start work at the Bui Dam site.  Today, the Bui Dam project is supplying electricity to parts of the Northern and Brong Ahafo regions.  The Akans say everybody has red saliva in his or her mouth but we decide to spit out the white one for the sake of peace. If Amaliba thinks he is the only one who can be saucy, he needs to think again because some of us can be acidic and we can indeed, spit fire.  If Amaliba thinks we can't bite, he should look at our teeth. People like Amaliba and Nunoo-Mensah are the ones who are making things difficult for the President as far as relationship between the public and the government is concerned.

It was Mr. Jerry John Rawlings, the former President of Ghana who told us that the electricity that his government was extending to the rural areas was to empower the people economically. The man was very right.  But if you empower people with electricity and the cost of getting the power is beyond the means of the people, what sort of empowerment is that?  Maybe Amaliba is so narrow-minded that he did not sit down to think of the many factories which use electricity to produce essential commodities which the poor people of Ghana need to survive.

Sometimes I do not blame people like Amaliba because they follow the footsteps of the President who once insulted ex-President Kufuor when the ex-President said arresting Kennedy Agyapong was like killing a fly with a sledgehammer. President Mahama looked into the face of the old man and told him the government will rather use a bulldozer to kill the fly. Today in John Mahama's Ghana, every Tom, Dick and Harry can make any ugly noise and go his way. (Apology to Brigadier-General Nunoo-Mensah).  Uh, God damn it, the lights are off and I need Amaliba's candle to boot my computer!!!