Ayikoi-Otoo Is Confused And Desperate 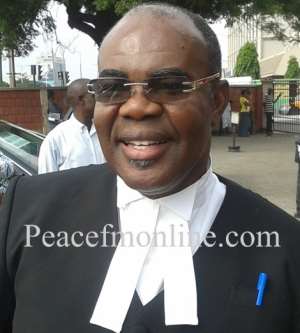 In politics, two flammable behavioral traits whose combination is almost guaranteed to induce massive electoral defeat are "desperation"and "confusion." And in his desperate bid to getting himself elected as chairman of the main opposition New Patriotic Party (NPP), Nii Ayikoi-Otoo has decided to, literally, put his foot in his mouth.

For those who may not know the man, Mr. Ayikoi-Otoo briefly served as Attorney-General and Justice Minister under President John Agyekum-Kufuor. He also ran as an NPP parliamentary candidate from the Teshie-Nungua district in Election 2012 and miserably lost.

He "miserably lost" because determined to clinch an electoral victory by hook or crook, the otherwise fine lawyer demanded a vote recount; unfortunately, the latter demand only complicated his misery. The problem with Nii Ayikoi-Otoo is that he pretends to be an authority on the recent hard luck that has hit his party at the polls.

First, he came out with a public statement to the effect that the inability of the NPP to clinching electoral triumphs in 2008 and 2012 was because of a mythical phenomenon called the "Akyem-Asante Rift." He was also widely reported to have said the foregoing to some TESCON members of the party during a speech that he gave at the University of Cape Coast (See "Akyem-Asante Factions Will Keep NPP In Eternal Opposition - Ayikoi-Otoo" JoyOnline.Com /Ghanaweb.com 10/27/13).

And then a couple of days later, the same man was widely alleged to be claiming that non-Akan members of the NPP feel like outcasts. I could have swore that Togbui Afadi put these rather unfortunate words into the mouth of Nii Ayikoi-Otoo. Of course, the preceding characterization of the party was predicated on what the chairman of the Constitutional Affairs of the NPP perceived to be the perennial domination of the presidential candidacy of the party by Akyems and Asantes. In essence, one does not know whether to chalk recent NPP defeats at the polls to the purported Akyem-Asante Rift, or the fact that the non-Akan members of the NPP have been made to feel like political outcasts.

In the part of Ghana where I come from, a person who equivocates like Nii Ayikoi-Otoo is often said to have a forked tongue. Such a man is deemed not to be worthy of the trust of his peers and associates. And the fact that he is chairman of the Constitutional Affairs of the NPP, makes his curious behavior all the more suspicious and treacherous. To be certain, Akyems and Asantes have a longstanding history of political rivalry. But the two sub-polities are not discrete ethnic and cultural entities to warrant being classified as "ethnic groups," as Mr. Ayikoi-Otoo would have his audiences believe.

Such categorial distortion only exists in the minds of knowledgeable non-Akans like the former Justice Minister who ought to know better, on the one hand, and lowly educated political scam-artists, largely among the opportunistic and propagandistic ranks of the membership of the ruling National Democratic Congress (NDC) who know no better.

For instance, not quite long ago, there was a rumor doing the rounds to the effect that the NPP presidential candidate for elections 2008 and 2012, Nana Addo Dankwa Akufo-Addo, failed to clinch the proverbial Holy Grail because nearly a half-million voters in the Asante Region had decided not to give him the nod, because unlike former President J. A. Kufuor, the Akyem-Abomosu native was not one of their own.

I partially know why this shockingly paradoxical situation occurred. But I also strongly believe that it is the primary duty and responsibility of Nana Akufo-Addo to address such undeniable anomaly. After all, hasn't it been often said that "Charity begins at home"?