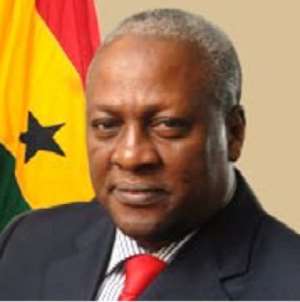 President John Mahama has left Accra for Stockholm, Sweden, where he will be co-hosting the mid-term review meeting of the Global Alliance for Vaccines and Immunisation (GAVI Alliance).

He will be co-hosting the meeting with the Swedish Minister for International Development Cooperation, Hillevi EngstrÃ¶m.

The meeting is expected to evaluate the progress made by the Alliance in its quest to deliver on the goals of the London pledging conference in 2011.

These goals include accelerating the uptake and use of under-used and new vaccines; strengthening health systems to improve immunisation coverage; improving long-term predictability and stability of immunisation financing; and helping to improve vaccine market conditions for developing countries.

President Mahama, who has been selected by the Global Fund as an ambassador, hosted with the Fund and GAVI a side event during the recent UN General Assembly on innovative development models and how to harness the power of global public-private partnerships in the post 2015 agenda.

The 2011 pledging conference saw donors committing $4.3 billion for the immunisation of 250 million of the world's poorest children by 2015, thereby saving up to 4 million lives.

Since then, GAVI has funded a total of 67 new vaccine introductions and campaigns. It expected that all the seventy-three GAVI-supported countries will by 2014 introduce 5-in-1 pentavalent vaccines.

GAVI has also helped to produce more predictability and competition in the vaccine market, which has helped to bring down the cost of fully vaccinating a child with three priority vaccines - pentavalent, pneumococcal and rotavirus - from $35 in 2010 to $23 in 2012.

In Ghana, GAVI has just helped negotiate for record-low prices for HPVs, which prevents cervical cancer. Ghana is therefore among the first countries to introduce the vaccine in a demonstration project in two districts.