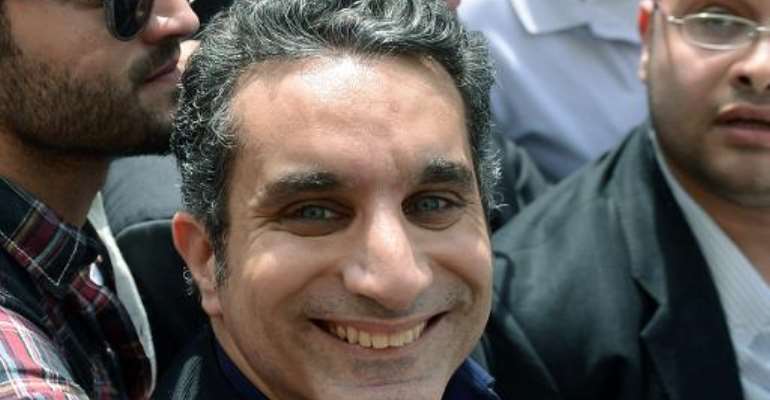 Egyptian satirist and television host Bassem Youssef is surrounded by his supporters upon his arrival at the public prosecutor's office in the high court in Cairo, on March 31, 2013. By Khaled Desouki (AFP/File)

Cairo (AFP) - Egypt's state prosecutor ordered on Monday a probe into a complaint against television satirist Bassem Youssef after his show mocked both the military chief and the formerly ruling Islamists, a judicial source said.

Youssef, known as 'Egypt's Jon Stewart' for modelling his show after the American comedian, debuted a new season on Friday in his first episode since the military overthrew Islamist president Mohamed Morsi in July.

State prosecutor Hisham Barakat ordered the investigation into one of several complaints against Youssef, which accuses him of inciting chaos and harming public security, the source said.

The complaint stems from a segment in the show in which a woman describes an unhappy marriage, symbolising Morsi, before a cousin representing the military saves her, the source said.

The complaint also accuses Youssef of insulting the armed forces.

The satirist had poked fun at leaked comments by military chief Abdel Fattah al-Sisi, in which the colonel general discussed developing "arms" in the media to improve coverage of the military.

Youssef was a leading voice of dissent during Morsi's year in power, and his regular jibes at the president resulted in an investigation that was eventually dropped.

He had initially backed the coup that overthrew Morsi after millions took to the streets demanding the Islamist's resignation.

But he has since expressed concern over the violent and extensive crackdown on Morsi's supporters, while also criticising the Islamists' attacks on churches following the coup.

On Friday, the ex-heart surgeon also turned his attention to the country's military-installed interim government, and the groundswell of adoring support for Sisi, whose portrait has become ubiquitous in posters across the country.