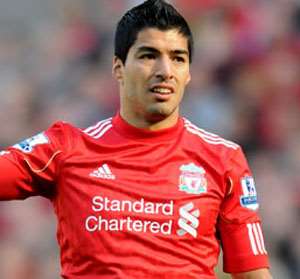 Liverpool manager Brendan Rodgers has praised Luis Suarez for the way in which the striker has moved on from the club's refusal to sell him to Arsenal.

Rodgers said he had been delighted by the response of the Uruguayan, who scored his first hat-trick at Anfield in Saturday's 4-1 win over West Brom. http://www.bbc.co.uk/sport/0/football/24591245

“I knew once I got the commitment from him in the summer he wasn't going to walk out,” said Rodgers.

“He's been great from then on.”
Liverpool turned down two bids from Arsenal http://www.bbc.co.uk/sport/0/football/23653350 this summer for Suarez, even though the 26-year-old pleaded with his manager and the club's owners to be allowed to join a team in the Champions League.

Following Liverpool's sixth league win of the season, Rodgers added: “He is a tireless worker and I knew that if he stayed it would be a case of him working as he always done because he is that kind of character.

“It was a difficult summer for him but it was for everyone. But we managed it as a club and he managed himself well and he has come out of the other side and he is performing as he does, to a very high level.”

The performance of Suarez may have stolen the show at Anfield but Daniel Sturridge also found the net to take the partnership's Premier League goal tally to 14 for the season.

When asked whether it was Liverpool's best performance of the campaign, Rodgers said: “Absolutely, I thought we looked a very good team.

“West Brom are a very good side. They went to Old Trafford and won, so for us to score four goals – and we could have had a few more – it was an outstanding team performance.”

The result leaves Liverpool second in the league table, but Rodgers hinted he would be prepared to further strengthen his squad.

“We want to get through to January with the team we have, the squad we have, and keep the confidence up,” he said.