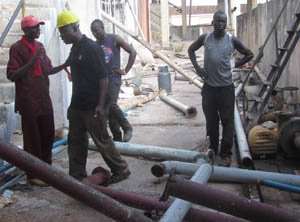 The staff of SPPC, once Ghana's largest producer of 'Rose' toilet rolls, have vow not to leave the company's' premises until they receive their redundancy package and other benefits from the company.

But the workers are demanding their salaries arrears and redundancy package before leaving the company's premises.

Workers of Rahambross, who got angry upon arrival due to the conduct of SPPC workers, decided to scale over the company's main gate to enter the premises.

On September 6, 2013, DAILY GUIDE gathered that management of the SPPC, a subsidiary company of the African Champion Industries (ACI), informed its employees through the Industrial and Commercial Workers' Union of Ghana (ICU), representatives of the employer that it was facing some financial difficulties and could not continue with its operations.

The workers were informed that the company had been sold to a South African investor who plans to use it as a warehouse and that the total sale amount had been deposited in an escrow account.

The parties agreed to pay employees' PF and any interest in respect of the fund before September 20, 2013.

Workers said that after they were asked to leave the company, management refused to negotiate with them over the redundancy package.

He bemoaned the treatment meted out to the workers.

According to him, the SPPC management should comply with the Labour law and stop providing verbal information.

He said several letters and reminders to the SPPC management by ICU had proved futile.

He said when management decide to sell the company, they agreed to pay the salary arrears and other benefits of the workers.

According to him, ICM is 100 percent behind the action of the workers and cannot overlook the law regulating the behaviour of the workers.

He said that workers of SPPC would be given the raw deal if they are not given their severance package.

Alhaji Mohammed Salifu of the Rahambross Enterprise told DAILY GUIDE that the workers prevented him from cutting the SPPC machinery that he legally bought from the company.

According to him, the workers assured him that after the payment of their redundancy package and PF, they would allow him to cut the company's equipment.

He noted that he gave the workers and management five weeks to settle their differences.

He said, 'I took loan from the bank to purchase the machinery as scraps, and each day the monies is attracting interest thereby I have no option than to consult my lawyer for next line of action.'

They therefore called on government, through the Ministry of Employment, to intervene in the matter since they cannot afford to go home empty-handed.