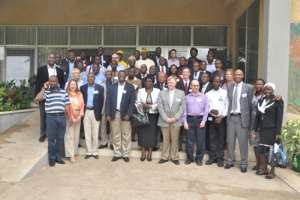 Top international researchers will meet with decision makers, business people, and other stakeholders working in the Nigerian cassava sector in the International Institute of Tropical Agriculture (IITA) in Ibadan, 28 to 30 October. The meeting aims to draw a roadmap for a cassava-based animal feed system that will highlight action plans for adding value to the cassava business in Nigeria. The roadmap will have a potential to serve as a model for all cassava-producing countries in Africa.

“We need to seize this opportunity and harness the benefits of every part of the cassava crop for national development, income generation, nutrition enhancement, and poverty alleviation,” says Dr Kenton Dashiell, IITA Deputy Director General, Partnerships and Capacity Development.

Nigeria, the world's top cassava producer, is transforming its cassava sector and strengthening the value chain of the root crop to make it more competitive. Reforms in cassava-growing countries in Africa, backed by supportive government policies and improved varieties developed by agricultural research centers have significantly raised the productivity of cassava. In Nigeria, annual production of cassava climbed to 52.4 million tons in 2011.

The increase in production of cassava roots is also generating 5 – 7.5 million tons of wet peels (10 – 15% of whole tuber), as farmers and industry rev up processing of cassava. Dr Iheanacho Okike, a researcher with the International Livestock Research Institute (ILRI) based in IITA, says the peels could contribute largely to the income of farmers, and provide additional economic options for livestock and fish producers if converted to animal feed. Additional benefits accrue to consumers due to increased production of milk, meat and fish, and the additional availability of maize and other grains that could otherwise have gone into the feed system.

The IITA-hosted meeting involves representatives from many international research institutes and is organized by the Global Cassava Partnership for the 21st Century, the CGIAR Research Program on Roots, Tubers and Bananas (RTB) and co-hosted by the Federal Ministry of Agriculture and Rural Development (FMARD).

As the second most important food crop in the least developed countries and the fourth most important source of food energy in the world after wheat, maize, and rice, cassava is generally grown by small holder farmers, who appreciate its tolerance of drought and poor soils, one of the reasons why the root crop has been dubbed “the crop of the 21st century.”

Cassava also holds great postharvest potential as food for the household, feed for livestock, and raw material for a wide array of value-added products – from coarse flour to high-tech starch gels. Both the roots and leaves can be directly fed to livestock, or used in producing commercial feed.

According to the Food and Agriculture Organization, “animals raised on cassava have generally good health, good disease resistance, and a low mortality, and require few, if any, antibiotics in their feed.”

Dr Claude Fauquet, GCP21 Director notes that “When the cassava transformation agenda of Nigeria is completed, the production of cassava by-products (peels) is expected to reach 2 million tons dry matter per year… this is the perfect time to set up a feed manufacturing system on an industrial scale.”

#
About IITA www.iita.org
The International Institute of Tropical Agriculture (IITA) is one of the world's leading research partners in finding solutions for hunger, malnutrition, and poverty. Its award-winning research for development (R4D) approach addresses the development needs of tropical countries. IITA works with partners to enhance crop quality and productivity, reduce producer and consumer risks, and generate wealth from agriculture. IITA is a non-profit organization founded in 1967 in Nigeria and governed by a Board of Trustees. IITA works on the following crops: cowpea, soybean, banana/plantain, yam, cassava, and maize. IITA is a member of CGIAR, a global agriculture research partnership for a food secure future.

About ILRI www.ilri.org
The International Livestock Research Institute (ILRI) works to improve food security and reduce poverty in developing countries through research for better and more sustainable use of livestock. ILRI is a member of the CGIAR Consortium which works for a food-secure future. See our research programs and activities ; See our work in CGIAR research programs; ILRI leads the Livestock and Fish Research Program and hosts the BecA-ILRI hub for East and Central Africa.

Founded in 2003, the Global Cassava Partnership for the 21st Century (GCP21) is a not-for-profit international alliance of 45 organizations and coordinated by Claude Fauquet and Joe Tohme of the International Center for Tropical Agriculture (CIAT). It aims to fill gaps in cassava research and development in order to unlock the potential of cassava for improving food security and also increasing incomes of poor farmers through work to develop industrial products from cassava. GCP21 is providing updated information regarding the crop, the scientists working on cassava and cassava R&D projects in the world.

Photo Caption: Participants at the cassava-based conference in IITA Ibadan