Dozens of Niger migrants die of thirst in desert 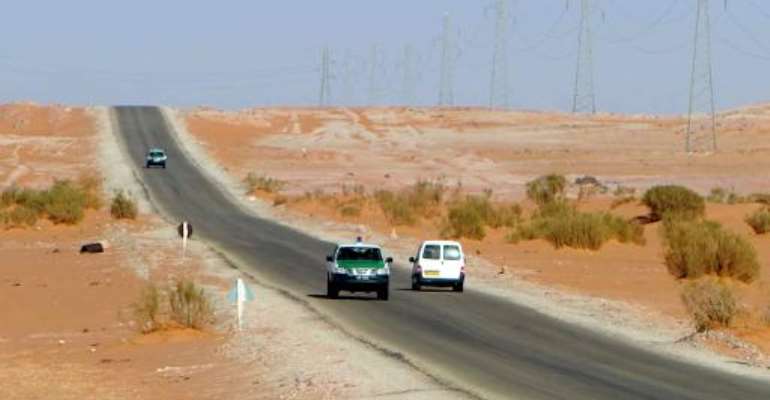 Algerian security forces patrol an area deep in the Sahara near the Libyan border on January 19, 2013. By Farouk Batiche (AFP)

Niamey (AFP) - Dozens of migrants to Algeria from Niger died of thirst in the desert south of the Sahara after their vehicle broke down, local officials said Monday, while police said 19 survived.

"About 40 Niger people, including numerous children and women, who were attempting to emigrate to Algeria, died of thirst in mid-October," Rhissa Feltou, the mayor of the main northern town of Agadez, told AFP.

"Many others have been reported missing since their vehicle broke down in the desert," he said.

"Travellers told us that they saw and counted up to 35 bodies, mostly those of women and children, by the road," said Abdourahmane Maouli, the mayor of the northern uranium mining town of Arlit.

The army has found the bodies of two women and three adolescents, a paramilitary policeman told AFP. No other bodies have so far turned up.

However, 19 survivors have been taken to Arlit, the policeman said.

According to Feltou, two vehicles carrying "at least" 60 would-be emigrants left Arlit "around October 15", heading for Tamanrassett, an Algerian town in the heart of the Sahara.

When one vehicle broke down, the other drove on empty, leaving the passengers behind in a plan to find spare parts and bring them back for repairs, the mayor of Agadez said.

The migrants, short of water, dispersed in small groups in search of an oasis, Feltou said. After days of walking, five survivors reached Arlit and alerted the army, "who arrived too late at the scene."

In the lucrative business of transporting Africans fleeing conditions at home for what they hope will be a better life elsewhere, traffickers quite frequently abandon their human cargo in the desert, leaving them to near certain death.

Azaoua Mamane, who works for the non-governmental organisation Synergie in Arlit, said the group left behind consisted of "entire families, including very many children and women, who departed for Algeria, where they hoped to beg for their keep."

How Slain Mfantseman MP Begged Killers To Follow Him Home Fo...
4 minutes ago