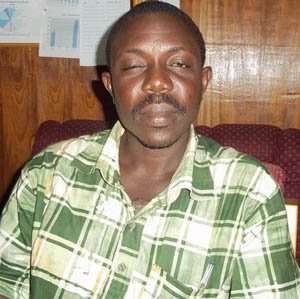 Some traditional leaders, residents and assembly members claimed that the desire of President John Mahama, the Volta Regional Minister, Joseph Nii Laryea Afotey Agbo and the Member of Parliament (MP) for the area, Fiifi Fiavi Kwetey to impose the nominee, Pascal Bronson Lamptey on them had exacerbated the situation in the area.

Several people in the country have opposed the nominations of some Metropolitan Municipal and District Chief Executives (MMDCEs) across the country.

They have been replaced by new people to facilitate the confirmation of the nominee, who was rejected on Friday, 18 th  October, 2013. The remaining six were maintained.

DAILY GUIDE's investigations also revealed that Pascal's wife is the niece of Fiifi Kwetey, the Minister of State at the Presidency.

Pascal was part of the team that helped Hon Kwetey to win the NDC's constituency primaries last year.

Some assembly members claimed the affected 12 government appointees were targeted by the authorities because they allegedly voted against the President's nominee in the first round of voting.

They also noted that the move was initiated after attempts to convince some elected assembly members failed.

The Illegal Letter
A letter, which is in the possession of DAILY GUIDE said, 'His Excellency, the President, acting under Section 5 (1) (d) of the Local Government Act 1933, has appointed you as member of the Ketu South Municipal Assembly with effect from Thursday, 24 th  October, 2013.'

'Your attention is drawn particularly to Act 462 Section 8 on cessation of Office of Assembly members, Section 9 (6) on Revocation of Appointments and section 16 on the duties of members of a metropolitan/Municipal/ District Assembly.'

Although the letter revealed the appointment of new people to the assembly, the old government appointees have not been served letters of disengagement.

But per the constitution, before the new government appointees can be admitted to the Assembly, they need to be duly sworn into office.

Clashes and Security
Four affected government appointees, who spoke to DAILY GUIDE, maintained that 'we are the legitimate members and so there is no way the new ones can vote in Monday's confirmation because they are not known by the Assembly. They have not been sworn in.'

The four, who spoke on anonymity, noted that there could be a serious clash because they would not hand over their position to the new people.

DAILY GUIDE has gathered there would be heavy police and military presence at the assembly meeting to put the fear of God in those who would oppose plans by government.

Chiefs Angry Over the Appointment
In a related development, the Somey and Klikor traditional areas within the Ketu South Municipality, have written petitions to express their dissatisfaction over the dismissal of the 12 government appointees in the assembly.

According to them, the dismissal of the government appointees violated the constitution.

The letters, signed by Torgbui Addo VIII of Klikor and Torgbui Sape Agbo of Somey, noted that the Presidency had flouted the law to satisfy its hidden agenda.

The two traditional areas rejected the new appointment and called on the President to react to the letters through the Volta Regional Minister.

Background
It would be recalled that the Ketu South Municipal Assembly on Friday, October 18, 2013 rejected President's nominee, Pascal Lamptey, who is also the Deputy constituency youth organizer of the NDC.

He polled 33 votes out of 56 while three votes were rejected.

The nominee needs at least 38 votes to be confirmed as MCE.