By Association Of Concerned Ghanaians In Europe (ACGIE) 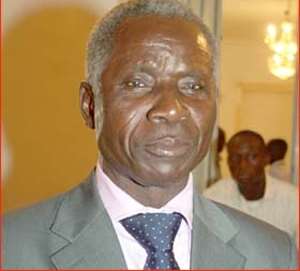 The Association of Concerned Ghanaians in Europe (ACGIE) is highly disturbed and deeply worried at the revelation that the National Security Advisor Brigadier General (Rtd) Nunno-Mensah has been working for the Central Intelligence Agency (CIA) of America. In his efforts to demonstrate his security credentials, the National Security advisor openly admitted in a radio interview that he worked for the American intelligence outfit.

Cleary, the admission by the retired general should be a source of worry and cause for concern in view of the security ramifications and the political consequences for our country. It has raised pertinent questions bothering on the peace and stability of our country and thus demands serious interrogation and some answers from the national security advisor.

Like all other Ghanaians, ACGIE would want to know from the Brigadier General (Rtd) at what point in his career did he start working for the Americans? Is it when he was an officer of the Ghana Armed Forces? In that case, that would amount to a breach of the oath of office and a violation of the Ghana Armed Forces code of conduct which forbids serving officers from working for foreign intelligence agencies.

Also ACGIE demands from General Nunnoo whether he became a CIA agent while serving as a member of the PNDC Military junta that misruled our country for more than a decade or he joined the CIA after retiring from active service? Last but not the least Ghanaians want to find out if and whether our national security advisor is still in active duty for the Americans.

It must be pointed out that working for a foreign intelligence organisation while serving as senior officer of the Ghana Armed Forces and a member of government is criminal, treasonable and unacceptable by any standard. It not only comprises the security of the state, it also undermines our national sovereigny, dignity and self-respect as a people.

While it is difficult to quantify how many sensitive states secrets the self-confessed CIA agent has passed on his pay masters in America and how many Ghanaians he has spied on, the fact remains that his conduct has caused an irreparable damage to the security of Ghana and the safety of Ghanaians. His position has therefore become untenable and should be dismissed with immediate effect and charges of treason brought against him.

ACGIE is equally disappointed that the President and his national security team did not do any background checks on Brigadier Nunoo-Mensah before appointing him as the National Security Advisor. Indeed, if due diligence had been exercised, Ghana would not be having a CIA agent as its National Security Advisor and the position would have gone to a more credible and patriotic Ghanaian.

We find it rather sad and tragic that nearly a week after confessing that he worked/works for the CIA, Brigadier General (Rtd) Nunoo-Mensah is still at post and we wonder why the President has not had the courage to dismiss him. Perhaps, President John Mahama needs to be reminded that his first duty as the commander-in-chief is to protect the sovereignty and territorial integrity of Ghana which also includes exposing and bringing to justice people who undermine and threaten the security of the state. We therefore call on the President to dismiss the National Security Advisor and ensure that possible treason charges are preferred against him.