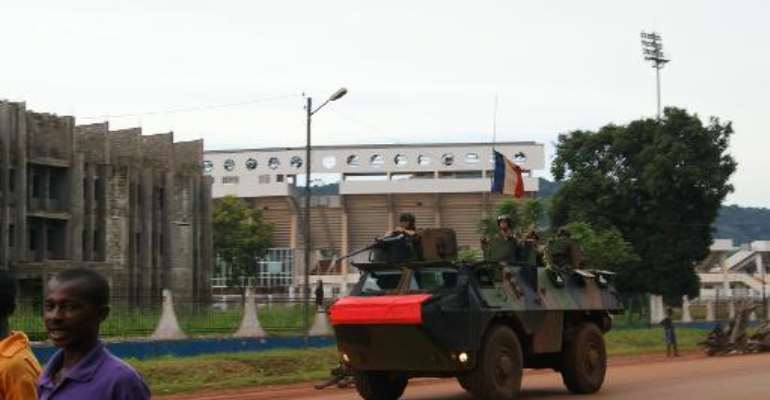 Self-defence groups called "Anti-balakas, equipped with weapons of war and machetes surrounded the town early this morning and shots from light and heavy firearms could be heard in several areas of Bouar," the military source said.

"We do not know what is happening in the different neighbourhoods right now," said the source, adding that "the local authorities have left the town".

Awalou Mamadou, a local shopkeeper in Bouar, which is located some 400 kilometres (250 miles) northwest of the capital Bangui, estimated the number of attackers at between 300 and 500 men.

Maxime Lalai, a local civilian who spoke to AFP by telephone, said "the attackers have surrounded the town, we are trapped, we don't know which direction to flee to."

Ali Camara, who works for the international NGO Cordaid, said he went to take refuge in a church, "but it is full there... I went back to my home where I stayed on the floor with my family."

The anti-balaka ("anti-machete" in the local Sango language) groups were formed by local residents exasperated by the abuses committed by members of the former rebel Seleka group.

The now disbanded Seleka toppled Francois Bozize in March, plunging the country into chaos, and its leader Michel Djotodia was formally installed as interim president in August to lead an 18-month transition.

Cases of executions, rape and looting by ex-Seleka fighters in the aftermath of the coup have stoked sectarian tension in the former French colony, where the population is 80 percent Christian.

Bouar has some 40,000 inhabitants and is located on the strategic axe connecting landlocked Central African Republic with Cameroon, where its main imports come through.