Kobby Acheampong Can "Hang" Himself 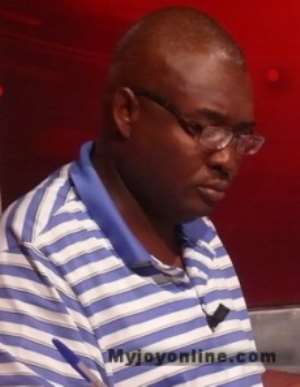 The full details of how a drillship belonging to the Ghana National Petroleum Corporation (GNPC) got sold to defray debts allegedly owed a French-owned bank in 2001, or so, are not as yet clear to me, and so I cannot presume to hold any substantive brief for either side of the raging controversy (See "Drillship Sale: 'Hang' Akufo-Addo - GYEEDA Boss" Radioxyzonline.com 10/24/13).

What is uncomfortably clear here, however, is that common sense appears to be a curiously rare commodity when it comes to the official protection of state property. If the drillship, named Discoverer 511, was profitably engaged in oil prospecting, or whatever purpose for which it was purchased, there is absolutely no reason for the government of the day, and time, not to have accessed alternative sources of finance to pay off debts owed the bank called Societe Generale.

We are told that the Discoverer 511 was sold for $24 million to liquidate a $19.5 million debt owed the aforementioned French creditor-banker. I am herein far less interested in the apparent inability of the sleuths involved in the investigations to retrieving the payment balance of $3.5 million, than the fact of the original debt owed to Societe Generale being estimated to have amounted to nearly $50 million.

In other words, the sale amount of the drillship scarcely defrayed half of the actual debt owed. If the foregoing observation has validity, then what concerned citizens ought to be asking is how the government of the day intended to settle the remaining $30 million debt owed the creditor.

Did the alleged out-of-court settlement guarantee the forgiveness or writing off of the outstanding debt owed Societe Generale? We also learn that aside from a legal battle between the Kufuor-led New Patriotic Party (NPP) and Societe Generale being extantly waged in Ghana, that there was a foreign front of the same battle being waged in London. How are concerned citizens to reconcile the two?

What is also clear is that the Rawlings-led National Democratic Congress' side of the narrative has yet to be fully exposed for public scrutiny. For instance, on what terms was the purchase of the Discoverer 511 executed? In other words, were the terms of purchse clement, or beneficial, to the country or was it virtually tantamount to a criminal ripoff scam? This is the part that most patriotic Ghanaian citizens ought to be focused on.

As for Mr. Kobby Acheampong's rather characteristically vacuous and desperate attempt to rope in Nana Akufo-Addo, it is nothing short of the grossly misguided dart of a rabble rouser. For starters, we are told that it was Mr. K. T. Hammond, the extant Deputy Energy Minister, who ordered the then-Chief Executive Officer of the Ghana National Petroleum Corporation (GNPC) to sign off on the sale of the ship in the capacity of a "Power-of-Attorney" representative, and not the extant Attorney-General and Minister of Justice, Nana Addo Dankwa Akufo-Addo, as Mr. Kobby Acheampong, the former Deputy Interior Minister and the newly appointed GYEEDA scam-artist, wants the public to believe.

And on the foregoing score ought to be pointed out that while, indeed, the Attorney-General's ministry had charge of the legal aspect of the transaction, both Mr. Hammond and the extant substantive Energy Minister were not necessarily acting on the instructions of Nana Akufo-Addo, when the Adansi-Asokwa Member of Parliament ordered Dr. Amos Ofori-Quaah, the extant GNPC-CEO, to sign off on legal documents sanctioning the sale of Discoverer 511.

In essence, what I am trying to argue here, in plain language, is that the Energy Ministry is the political co-equal, or coordinate, of the Ministry of Justice, and not the latter's subordinate. By now, it ought to be clear to all that something serious went wrong with both the way and manner in which the drillship Discoverer 511 was purchased and disposed of. It definitely has a lot to do with the civic responsibility and the sense of patriotism of Ghanaian leaders in general.

And any constructive solution to this problem ought to equally entail devising a more sensitive and responsible leadership approach to our collective national interest. This is what organic national development is fundamentally about.