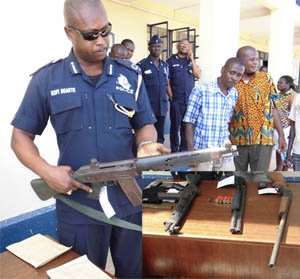 As part efforts to clamp down on the activities of armed robbers in the cocoa growing areas of Sefwi Wiawso and other adjoining communities, the Western Regional Police Commander, DCOP Nathan Kofi Boakye has mapped out strategies to deal with the nation wreckers.

One of the strategies that yielded positive results was the creation of many police barriers on the highways in the Sefwi areas, particularly where there are no communication networks, to check armed robbery and the requisite vehicle particulars.

Last Saturday, the Regional Police Command arrested two alleged armed robbers who had purportedly been terrorizing cocoa farmers, purchasing clerks and commuters to and from the Sefwi areas to other parts of the Western Region.

Briefing DAILY GUIDE on how the two alleged robbers were arrested, DCOP Kofi Boakye told DAILY GUIDE that on October 19, 2013, at about 2.00pm, the Sefwi Divisional Police task force on service patrol duties on the Sefwi-Humijibre-Wassa Akwaso road intercepted a taxi cab with the number AS 3757-12.

He mentioned that the taxi cab was being driven by one Emmanuel Akaah from Sefwi Bekwai towards Diaso, in the region, with five passengers on board.

DCOP Kofi Boakye indicated that the police conducted a search in the taxi cab and one SG 540 rifle with 29 rounds of live ammunition concealed in a fertilizer bag was found.

According to the Regional Police Commander, the rifle was suspected to have been used for a robbery on October 18, 2013 on the same route.

He said suspect Elisha Akaliba alias 'Osofo', aged 27, a native of Pusiga in the Upper East Region and a resident of Alaba in Kumasi, claimed ownership of the weapon.

When Akaliba was interrogated, he claimed he was sending the rifle and ammunition to Anthony Adane also called Kofi Bono, aged 28 and a native of Goka in the Brong Ahafo region.

When the police searched Akaliba, three mobile phones and a cash of GHâ‚µ700 were found on him.

Akaliba then led the police to the residence of Adane at Diaso in the Central Region where the latter was arrested.

When Adane's room was searched, a pump action gun and one SB shotgun with five rounds of live 'AAA' cartridges, two live AK 47 rifles ammunition and one live ammunition meant for stern gun plus one black mask were discovered.

Elisha Akaliba told the police that he had a friend called Abdulai who hailed from Bawku and that about two weeks ago, they met together with Anthony Adane in Kumasi.

At the said meeting, Adane disclosed that he wanted a gun to buy and so it was agreed that the gun would be purchased by Abdulai and sent to Adane at Diaso in the region for an amount of GHâ‚µ2,000

Abdulai then left for Bawku and on October 19, 2013, he called Akaliba to meet him in Kumasi for three rifles and 21 rounds of ammunition to be given to Anthony Adane.

'While on his way to hand over the gun to Anthony Adane, the taxi cab he was in was intercepted by the police and he was arrested', DCOP Kofi Boakye stated.

According to the Regional Police Commander, Anthony Adane had denied the allegations but stressed that evidence had been established that the two knew each other very well and that they had met in Kumasi.

'It is believed that the two are not the only people involved in these criminal enterprises. Investigations are being intensified to get to the bottom of the case and to arrest the remaining suspects and retrieve the other weapons that might have been hidden elsewhere', he added.