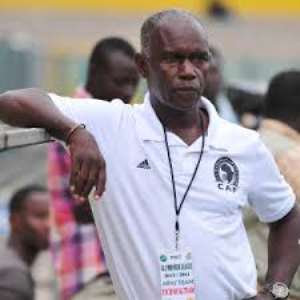 New Inter Allies coach Herbert Addo is not getting carried away with his side's impressive 3-0 win over Bechem United on Wednesday.

The Tema-based side got their first ever Premier League points after seven prior failed attempts in the Ghanaian top flight in Wednesday's game.

The rookies finally got off the board by dishing out a hefty 3-0 defeat to Bechem who had just come off a famous win over leaders Asante Kotoko.

The win has sparked talks of a top flight revival and for Allies with a few others suggesting an even better run.

But coach Addo who was brought in as part of the solutions to Allies' woeful campaign is remaining grounded despite the huge distraction being provided by the massive win on Wednesday.

“The first objective is for us to get out of the relegation zone,” he said.

“That is the focus and it is good to get the first win.”

Inter Allies however remain at the foot of the Ghana Premier League table.