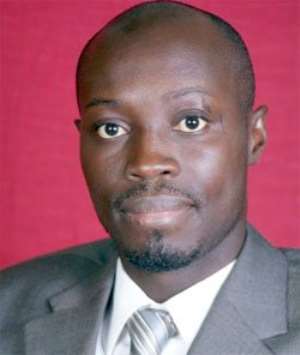 GHACEM Limited has presented a cheque for GH¢2.4million to Government, representing an interim dividend payment on its 2013 accounts.

The dividend, which represents government's five percent shares in GHACEM, was received by the Deputy Minister of Finance and Economic Planning, Cassiel Ato Forson and Azu Sam-Aziakor, Director General of Administration at the Finance Ministry on behalf of Government.

Dr. George Dawson-Ahmoah, the Strategy and Corporate Affairs Director of GHACEM, on behalf of the Board of Directors of GHACEM Limited, presented the cheque at a short ceremony held at the Finance Ministry

In his remarks, Dr. Dawson-Ahmoah said his outfit deemed it appropriate to play its role as a corporate citizen by honouring its financial responsibilities, including payment of government's dividends yearly.

'We have been committed in our financial contribution to the state in terms of direct and indirect taxes, disclosing that as at 2012 GHACEM had made total payment of GHC137 million to the State.

GHACEM is not only be a business minded entity but also concerned with giving back to the society it operates from as has been captured in the company's corporate social responsibility programmes, he noted.

Mr. Cassiel Ato Forson commended GHACEM for their loyalty and complying with the law, stressing that the 'consistency and steady increase in dividends payments to its shareholders including Government over the years deserves big applause.'

Mr. Forson used the occasion to entreat all companies in the country to emulate GHACEM's example and consistently pay their tax obligations, noting that such a step would enable Government to undertake planned projects for the year.