Time To Mourn Over Corruption In Ghana 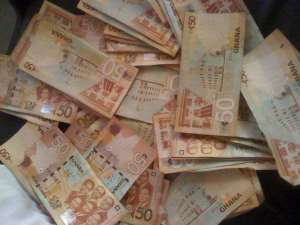 A Financial Analyst, Sydney Casely Hayford, is advocating for a total 'National Day Of Mourning' in grand protest of the raging non-stop corruption currently staring Ghana in the face.

This, he said, could go a long way to help inject a great deal of seriousness into the anti-corruption crusade mechanisms.

According to him, the talks have been more than enough and it is time Ghanaians showed total commitment by getting involved in the need to rid the industry of corruption.

“I personally think, we should declare a National Day Of Mourning which I have tagged a National Red-Tag Day to wage a massive war against corruption across all divide,” Sydney Casely Hayford contended.

His call followed series of grand financial siphoning from public resources which is becoming the order of the day.

This is in the wake of reports by The Chronicle suggesting that Ghana Revenue Authority (GRA), an organization charged with the responsibility of collecting taxes on behalf of the state, has paid within three years almost GH¢144 million to a company called SUBAH INFOSOLUTIONS LIMITED, for absolutely no work done. The company is paid on average GH¢4 million a month.

Credible information, backed by documentary evidence that has been obtained by The Chronicle indicates that the GRA contracted SUBAH INFOSOLUTIONS LIMITED somewhere in 2010 to electronically monitor revenue generated by the Telecom Companies to enable them calculate and collect the right taxes from the companies. The contract is worth $100 million per year.

The Chronicle gathered that the contract itself was derived from the Communications Service Tax, which was passed in 2007, mandating the government to monitor the revenue generated by the telecom companies.

There was, however, a dispute over the monitoring, as contained in the law, forcing the government to suspend it for review. The amended version of the law was passed by Parliament on Tuesday, July 9, 2013, and it reads as follows:

“Section 14 of Act 754.The principal enactment is amended in section 14 by the substitution for section (4). (4) (a) The Minister in collaboration with the Minister responsible for communications

i. Shall establish a monitoring mechanism to verify the actual revenue that accrue to service providers for the purpose of computing taxes due to the Government under this Act

ii. Shall have physical access to the physical network nodes of the service provider's network at an equivalent point in the network where the network providers' billing systems is connected.

iii. Shall ensure that a common of monitoring revenues under this Act as well as revenues accruing from levies under the National Communications Authority Act 2008, (Act 769).

(b) Any operator who fails to provide access to its network for Government or its appointed agents as specified in subsection (4)(a)(ii) commits an offence and is liable to pay a penalty of five percent of annual gross revenue of the last united financial statement after the first thirty days and if the situation persists after ninety days, the National Communication Authority may revoke its operating license.

An operator who has an objection to the introduction of any equipment to a physical node on its network shall within seven days of receipt of a request from Government or its appointed agents shall demonstrate before a High Court the validity of its state reasons for the objection”.

The Chronicle gathered that if any contract should be awarded at all, it should have taken effect from July this year when the law came into force, but the contract for SUBAH INFOSOLUTIONS LIMITED was awarded way back in 2010, making the whole process illegal.

What has even exacerbated the situation is the fact that Subah Info has not deplored any equipment as specified in the amended version of the Communication Service tax law to electronically monitor the revenue, yet at the end of every month, amounts ranging between GH¢2 million and GH¢5 million is transferred into their accounts by the Ghana Revenue Authority.

Industry players, who spoke to The Chronicle on condition of anonymity, insisted that SUBAH INFOSOLUTIONS LIMITED has not deplored any equipment that links up with that of the telecom companies to enable them monitor the revenue, and that if such equipment had been deplored, they would have known.

The industry players further told The Chronicle that an IT company has been obtaining data from the National Communication Authority, which they also use to access taxes payable to them (NCA) and then write an invoice to cover it and present it to the GRA, which is hurriedly approved and the payment effected, even though the GRA knows Subah Infosolutions had not executed any job.

Documentary evidence shows that from January 2011 to 2013, the GRA has transferred on monthly basis various sums of money to SUBAH INFOSOLUTIONS LIMITED for the supposed work it has executed, when nothing of that sort had been done. In September 14, 2011, the GRA transferred GH¢2, 689, 854 to the company, said to be wholly Ghanaian owned.

The public relations officer of the GRA, Anne Anepa has always failed to pick Chronicle calls or even return text messages sent to her. Sources at some of the telecom companies, however, told The Chronicle that even though the auditing outfit of GRA audits their accounts manually from time to time, they are not aware of any electronic monitoring by SUBAH INFOSOLUTIONS to merit the amount being paid to them.