Tema Development Corporation to be privatised 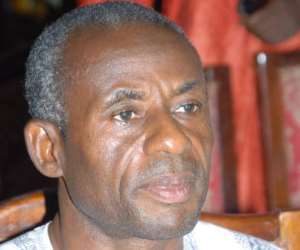 The government is taking steps to convert the status of the Tema Development Corporation (TDC) to a limited liability company to empower it to operate anywhere in the country to help bring sanity in the country's development schemes.

The Minister of Water Resources, Works and Housing, Alhaji Collins Dauda, made this disclosure at the corporation's third Annual General and Stakeholders Meeting (AGM) at Tema.

He commended the corporation for its effort in meeting the economic challenges in the industry and added that: 'you need to be commended for your foresight.'

Alhaji Dauda urged the Tema TDC to use all legal means available to ensure that people comply with the payment of fees associated with plot regularisation.

He said that would inject sanity into areas already encroached on and built without authorisation.

The minister was reacting to reports that TDC had regularised the tenancy of encroachers. However, when it comes to the payment of fees due the government, some of the affected people have refused to pay.

He noted that: 'the government cannot continue to suffer from such misbehavior; how else can we develop as a country with such indiscipline?'

Alhaji Dauda called on the management of TDC to liaise with the relevant ministries and agencies to address  the issue of squatters in the Tema Metropolis and ensure that measures were put in place to forestall future occurrences.

He announced  that  as part of efforts by the government to reduce the housing deficit, which is now in excess of 1.7 million units, the ministry had released an initial 24 block of flats at the government's affordable housing project site at Kpone to the TDC for completion, while the rest of the site would be handed over formally at a later date.

Alhaji Dauda said the project formed part of a total of 4,720 affordable housing units located at six sites in five regions that government was working on to complete.

The Managing Director of TDC, Mr Joe Abbey, said the corporation was considering a number of options to deal with tenants who had not paid their land management fees and ground rent under the plot regularisation programme.

He said the TDC in 2012 completed 42 housing units at communities 22 and 25 and two two-storey detached houses at Community 6 were about 80 per cent complete.

Mr Abbey added that eight block flats were to be constructed this year at Site 3, Community 1, to turn out 128 housing units.