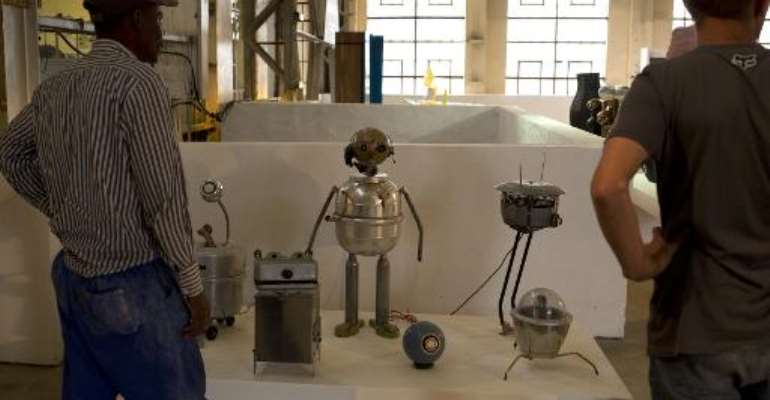 Two men look at "Invasion" by Philippe Bousquet displayed at the Museum of African Design in Johannesburg on October 24, 2013. By Alexander Joe (AFP)

Around 200 works by 100 artists fill the space in the city's old industrial area Maboneng. Most are from southern Africa, but director Aaron Kohn said the museum had continental ambitions.

"African design really stands up with the rest of the world," Kohn told AFP.

"You can put a lot of these pieces next to something from Paris or Milan or New York and they'll sell just as well, they'll have just as much value, they're really just as great pieces."

"A lot of stuff is made of wood, metal, ceramics here. There's a lot of things like colours," explained illustrator Atang Tshikare, 33.

"People are starting to see that art is more than just a piece of paper... it can be turned into something else that actually exists," said the artist, whose glow-in-the-dark bicycle, yellow-brown etched coffee table and sketched mural feature at MOAD.

"You have it as an artwork, but if it's a functional artwork, it is more enjoyable as well."

Though contemporary art galleries dot African cultural centres like Dakar, Lagos, Nairobi, and Cape Town, Johannesburg's MOAD claims to be the first of a kind to provide a space for the continent's eclectic designers.

"There's a lot of attention in Europe and America focused on African art and African design," said Kohn.

"A lot of that means that artists travel straight to those places where their work gets sold in those places without ever getting exposed in South Africa," he said, explaining the logic behind the museum.