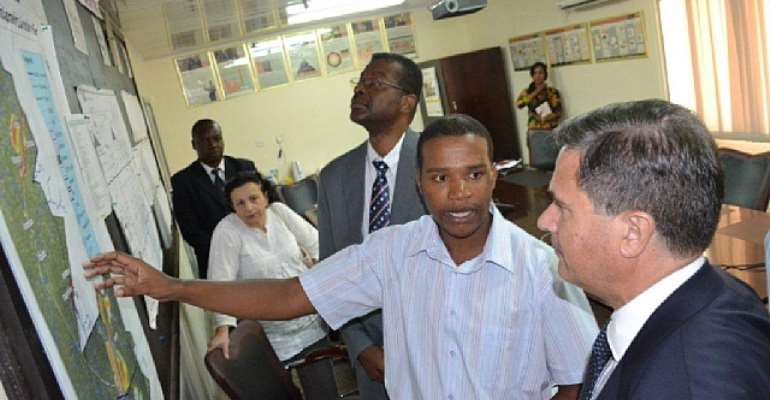 The French Ambassador to Ghana, His Excellency Frederic Clavier has expressed his country's readiness to continue to partner Ghana as part of that country's efforts to foster socio-economic development.

He mentioned the areas of education, science and technology as key growth sectors in the economy that could drive the other sectors along into development if enhanced.

Ambassador Clavier made this remark when he and his entourage paid a courtesy call on the Managing Director of AngloGold Ashanti Iduapriem Mine, Sicelo Ntuli in Tarkwa in the Western Region recently. The visit, which was a tour of some French investments in the region, was a follow up to an earlier one embarked on by the Ambassador early this year.

These include the Takoradi Thermal Plant (T2) at Aboadze and TICO Company, which managed the Takoradi 2 Power Plant.

According to him, France was poised to establish more businesses in Ghana under the French Chamber of Commerce, which called for more collaboration

He stated that it was time institutions of higher learning specialising in the extractive industry in the country collaborated with other organisations and countries to produce more expertise with competencies to create more opportunities to boost the prospects in the sector.

“France and Ghana have had a relationship for long and the French Embassy will always support that. We will continue to partner Ghana to promote business opportunities to further strengthen our bond,” he said.

In this regards, he commended AngloGold Ashanti Iduapriem Mine for partnering the University of Mines and Technology to bring about the much needed industry experience. The partnership, he said was a good example of the company's commitment to boost capabilities that would benefit the industry, the community as well as the individuals under training.

Addressing the delegation, the Managing Director of AngloGold Ashanti Iduapriem Mine, Ntuli, stressed that AngloGold Ashanti was committed to developing host communities through its numerous sustainability programmes

“AngloGold Ashanti would continue to demonstrate interest in the welfare of its host communities in line with making these communities better off,” he added.

He enumerated some social interventions rolled out by the Mine which he said had significantly improved the lives of the people.

He also expressed the mine's willingness to welcome any opportunity that would contribute to the sustainable development of Tarkwa and its environs.

The delegation included the Head of Cooperation and Cultural Affairs of the French Embassy, Paulo Pais, Cultural Cooperation Attache, Anne Marie Coeveltn and the Vice Chancellor of the University of Mines and Technology, Professor Jerry Kumah.

The delegation later toured the on-site installation of Total, a French company which suppliers fuel to the mining companies in and around Tarkwa.

This includes land positions in Colombia, Guinea and Australia, among others. AngloGold Ashanti employed 61,242 people, including contractors, in 2011 and produced 4.33Moz of gold, generating $6.6bn in gold income. Capital expenditure in 2011 amounted to $1.5bn. As at 31 December 2011, AngloGold Ashanti's Ore Reserve totalled 75.6Moz.

The primary listing of the company's ordinary shares is on the JSE Limited (JSE).