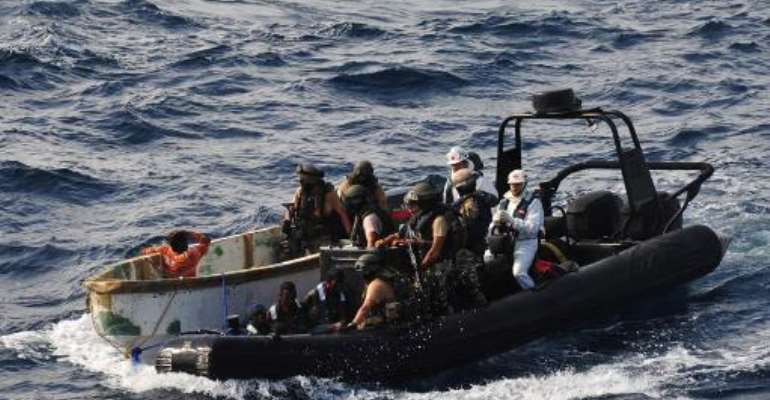 This handout picture released by the EU Navfor on January 13, 2012 shows members of the ESPS Patino escorting suspected pirates to their ship. By (EU NAVFOR/AFP/File)

Mombasa (Kenya) (AFP) - Kenya jailed four Somali pirates for seven years Wednesday over the seizure of a fishing boat in 2010, as efforts continue to end attacks off the Horn of Africa coastline.

They were later arrested by a Spanish warship patrolling off the Somali coast as part of the European Union anti-piracy mission, which freed the nine crew and a Somali translator held hostage by the pirates.

Magistrate Stephen Gacheru in Kenya's port city of Mombasa said the jail sentence should act as a "warning to others", and ordered the four be sent back to Somalia when released.

At the peak of the piracy crisis in January 2011, Somali pirates held 736 hostages and 32 boats, but attacks have since waned in the face of stepped-up international naval patrols.

However, some 90 sailors and fishermen are still being held hostage by Somali pirates, many from poor families in Asia.

Several Yemeni fishermen are also being held on six boats used by the pirates as "mother ships", floating bases from which to launch their skiffs and attack large commercial vessels far out to sea.