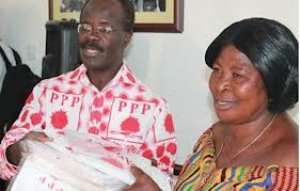 The Progressive People's Party after the organization of its polling station elections has planned to organize its Constituency Conferences to elect Constituency Executives throughout the country in November, 2013.

The Regional Executive Committees have been directed to coordinate the elections under the supervision of the Electoral Commission.

The party has also planned to conduct Regional Conferences to elect Regional Executives in December, 2013. The Regional Executive Election Nomination Forms will cost GH¢20.00 and the filing fee will be GH¢300.00 for chairmen and GH¢150.00 for all other positions.

The party intends to hold its National Convention to elect National Officers in March, 2014.

According to the party's constitution, only card carrying members of the party who have fully paid up their dues will be considered bona fide party members and eligible to contest and / or vote in any election of the party.