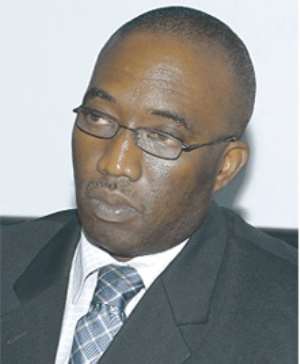 The New Patriotic Party (NPP) Member of Parliament (MP) for Essikado, Joe Ghartey is calling for peace and unity ahead of the election of officers of the party.

In a statement issued in Accra yesterday, Mr Ghartey, who is also the Second Deputy Speaker of Parliament said, 'Any internal squabble during this period will only provide our opponents with electoral ammunition and leave our party weaker ahead of the 2016 elections.

'I therefore urge all campaigners and supporters to focus on touting the credentials of their candidates and desist from maligning opponents,' he stated.

'We will remain united even after this internal electoral process and work with a common sense of purpose towards victory in election 2016.

He called on the rank and file of the NPP, which is the largest opposition political grouping in the country, to join hands in rebuilding the party in unity towards victory in 2016.

'As we prepare for the upcoming series of internal competitions aimed at electing polling station, constituency, regional and national executives, I will like to take this opportunity to caution all party faithful against acts that could damage the party by the end of the contest,' he emphasized.

'In most political parties, such internal competitions are often fraught with the temptation to attack and accuse one another with the view of winning delegate votes.

Joe Ghartey, a former Attorney-General under the erstwhile NPP administration, noted that 'I will like to call on all well-meaning NPP members and sympathizers to desist from any temptation to employ such strategies during our internal competitions.

He also urged campaigners to desist from personal attacks, insults and name-calling and promote healthy competition as has been the custom of the NPP over the years.

'It is only when party members and sympathizers close ranks and work assiduously towards the rebuilding of the party that the NPP can reclaim its position as a governing party capable of helping rebuild the nation.'

He was happy with the budding spirit with which the National Executive Council (NEC) led the NPP to draw up a roadmap for the election of new party officers after the Supreme Court dismissed the presidential election petition filed by the 2012 presidential candidate of the NPP and other members.

'As disheartening as that experience was, I take consolation in the fact that our great party is quickly re-organizing itself to prepare for the battle ahead.'