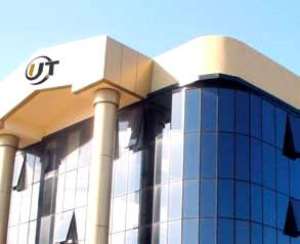 Accra, Oct. 22, GNA - UT Bank on Monday presented a cheque for GH¢ 5,000 to support Ghana Journalists Association (GJA), to organise its flagship awards, which comes off on November 2.

The support will cover the journalist who will emerge as the winner for the business category. The support would comprise a laptop, a plaque and certificate.

Presenting the cheque to the executives of the GJA, Mrs Sophia Lissah, Head of Communications of UT Bank said financial entity was associating itself with the awards to show appreciation to  journalists who have distinguished themselves in the profession.

'The success of UT Bank cannot be complete without the media and they must be celebrated and rewarded for their hard work,' she said.

She noted that journalists had something great to offer to the development of the nation and ensure peace and stability.

'Despite all the challenges the country has faced...within these few months, journalists have contributed to the peace w e are enjoying today.'

Mrs Lissah urged journalists to be more circumspect and do more investigations before they publish stories so that they do not destroy the image and reputation of persons and businesses.

Mr Affail Monney President of GJA commended UT Bank for the continuous support it offers the Association for the past five years in rewarding excellence in the media.

He said journalists needed to help shape the paradigm from mere reporting to bringing development issues to the door steps of the both government, policy makers for their attention.

The awards, which come off at the Banquet Hall and would be on theme:' Promoting Healthy Partisanship and Fruitful Partnership in Governance: The Role of the Media.'

It will be graced by the Chief Justice- Mrs Georgina Theodora Wood as the Guest Speaker, Alhaji Mohamed Garba, President of the Federation of African Journalists as the Guest of Honour , the UN Resident Coordinator as the Chairperson and President John Dramani Mahama as the Special Guest of Honour.

In all, 45 awards would be given to deserving journalists.