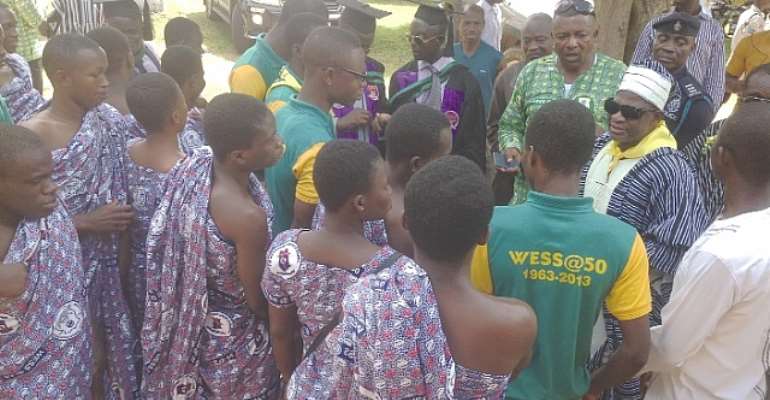 The Wenchi Methodist Senior High School (WESS) in the Brong Ahafo Region has climaxed its 50th anniversary celebration with a colourful durbar. The government was called upon to help improve facilities in the school to enable the visually impaired students of the school to cope with academic work.


The school was the first in the country to integrate visually impaired students and their sighted counterparts to share facilities in common.

The durbar was held at the school park on Saturday, to climax the anniversary which was on the theme "WESS @ 50, Achievements, Challenges and Future Prospects in this Digital Age".

Dr Danaa, who was also the guest speaker at the durbar, paid glowing tributes to the founding fathers, past headmasters and the current school administration, for their contributions towards the growth and academic excellence of the school.

He urged the past students of the school to use the occasion to revitalise the spirit of commitment to their alma mater and entreated the present students to study hard to enable them to become useful citizens for the country.

He gave an assurance that he was ready to assist any of the visually impaired students who would gain admission into the universities.

A deputy Minister of Education in-charge of Pre- Tertiary and Member of Parliament (MP) for Techiman North, Mr. Alex Kyeremeh, who is also an old student of the school, in an address, pledged the support of the government to improve infrastructure in SHSs across the country to enhance academic work.

He added that the government's pledge to construct 200 new SHSs in the country by the end of its first four-year term was on course.

The Deputy Brong Ahafo Regional Minister, Mr. Justice Samuel Adjei, for his part, appealed to parents to inculcate good behaviour and instill discipline in their wards.

He further entreated parents to ensure the progress of their wards academically by taking pains to monitor their academic performance and supervise their assignments at home.

The headmaster of the school, Mr John Kwamina Ankomah Simpson, in his report, said the school recorded 100 per cent in the 2013 West Africa Senior School Certificate Examination (WASSCE).

He appealed to the government to complete the girl's dormitory which was started in 2002 and also consider the school's request for the construction of a practical room for the Home Economics Department and an Art Studio for the Visual Arts Department as well as an administration block.

Some of the dignitaries who graced the occasion were Mr Samuel Bannerman- Mensah, a former headmaster of the school who was Director General of the Ghana Education Service (GES), Prof. George Gyan Baffour, MP for Wenchi and Rt. Rev. Samuel Fred Ansu, the Methodist Bishop of Wenchi.