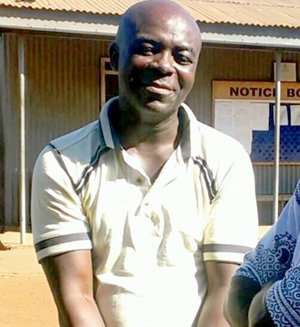 The Prampram Police have arrested a generator repairer, who together with his accomplice, reportedly snatched a taxi cab with registration number GS 6273-10 from a driver at knifepoint at Dawhenya in the Ningo-Prampram District of the Greater Accra region.

Akoto Kodzo, a resident of Gulf City, near Ashaiman and his accomplice, whose name was only given as Kwaku alias Body, a resident of Michel Camp, near Tema, were said to have hired the services of the driver at Community 9.

Deputy Superintendent of Police (DSP), Paul Bampoe, Prampram District Police Commander told DAILY GUIDE that Kodzo and his accomplice, who is currently at large on September 19, 2013 at about 10:30pm, asked the driver to transport them from Community 9, Tema to the Central University College (CUC) at Dawhenya for an undisclosed fee.

The victim, he said, conveyed the suspects to the junction of the University College and demanded money for the services rendered, adding that the suspects, who had planned to snatch the taxi from him, insisted that they had not reached their destination.

According to the police commander, the driver, upon sensing danger, parked the vehicle and defied the order of Kodzo to further drive the car.

He added that Kodzo, who was seated directly behind the driver, abruptly held him while his accomplice pulled out a knife and threatened to stab the driver if he stopped the engine of the vehicle.

DSP Bampoe noted that the suspects removed a mobile phone from the driver's pocket after which they forcefully dragged him out of the taxi and sped off.

The suspects, according to the commander, drove the taxi to a distant location and parked it.

They were in the process of searching the taxi when a police patrol team, which had been informed about the incident, saw them, he said, adding that the suspects, in an attempt to escape, sped off and abandoned the car in the bush.

He said Kodzo managed to get to the campus of the University College where he told the security personnel that he had been attacked by some armed robbers who snatched his motorbike from him.

According to reports, the security personnel escorted Kodzo to the entrance of the university to assist him board a vehicle to travel home.

He was later identified as one of the attackers and arrested with the help of the security personnel.

The suspect was handed over to the Prampram police who detained him for further questioning.