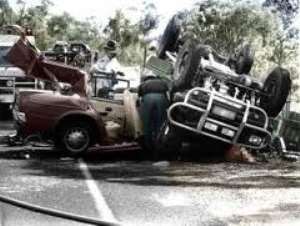 Kumasi, Oct 20, GNA - A total of 239 people lost their lives through road accidents in the Ashanti Region between January and September, this year.

Briefing the Ghana News Agency (GNA) in Kumasi on the accident returns for the third quarter of this year, he indicated that the total number of vehicles involved stood at 1,425.

More than 1,300 people sustained various degrees of injury in the accidents with fines imposed on the offending drivers amounting to about GH¢133,090 after they were arraigned.

Chief Superintendent Hlordzi stated that the third quarter saw the highest fines imposed on offending drivers, following sustained campaigns by the MTTU to bring sanity on the roads.

He said reluctance on the part of drivers to observe motor traffic rules and regulations was the main cause of accidents in the Region, saying it was incumbent on them to shun over-speeding, drink-driving, overloading, offloading and picking passengers at unapproved locations.

Let's Avoid Second Wave Of COVID-19 By Following All Protoco...
16 minutes ago