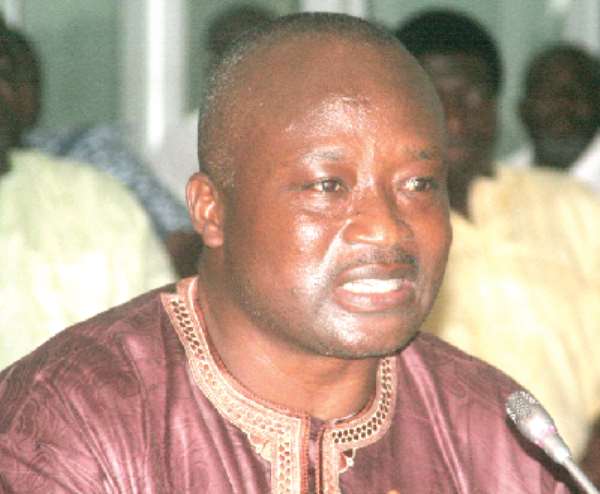 Angry youth of Odumase, the capital of the Sunyani West District, on Wednesday, disrupted a meeting between the Brong Ahafo Regional Security Council (BA REGSEC) and the chiefs of Odumase to discuss the way forward following the death of a resident of the town, Kwabena Frafra, alias Kwabena Aberima. Aberima, 25, was shot dead around 9 p.m. last Tuesday, by a member of a police patrol team in the area for allegedly trying to wrest a weapon from the said policeman, Constable Frederick Odjer Narh, who has since been arrested and placed in police custody.

The action of the angry youth, who were clad in black and red to mourn their friend and brother, cut short the visit of the REGSEC to the palace of the Omanhene of Awua Odumase, Nana Kwame Apraku, to express their sympathy and condolences to the bereaved family, the chiefs and people of Odumase.

Reports monitored by the Daily Graphic indicated that the angry youth chased away the members of the REGSEC, led by the Deputy Brong Ahafo Regional Minister, Mr Justice Samuel Adjei, amid pelting and hooting.

But Mr Adjei, who is also the acting Chairman of the REGSEC, said they had not been chased away by the youth of the town, as reported, but rather the youth disrupted the meeting between his team and the chiefs and elders of the area at the chief's palace.

He said immediately he and his team arrived at the Awua Odumasehene's palace, some angry youth besieged the area, chanting slogans, for which reason he and his team decided to move out to meet and address the youth, but to no avail, as they kept making loud noise.

Mr Adjei said as a result, he could not address  them and drove back to the Sunyani West Municipal Assembly Hall where they later met with the Omanhene and appealed to the Odumaseman Youth Association to go and impress on their peers to keep calm and exercise restraint.

As of the time of filing this report, calm had return to the town, but the youth were still clad in their black and red clothes to mourn Aberima's unfortunate death.

When the Daily Graphic visited the deceased's family house, Mr Anaba Aberima, father of the Aberima, said the Sunyani West Municipal Chief Executive (MCE),  Madam Agnes Kusi, had led members of the District Security Committee (DISEC) to sympathise with them and appealed to them to exercise restraint as investigations into the matter were underway.

He said for now they could not do much, noting that based on the assurances of the REGSEC and the DISEC, they knew justice would be done.

He explained that the REGSEC could not rely solely on the police interim report and that it was waiting for the post-mortem report, which is an independent report, to take a definite decision.

Mr Adjei used the opportunity to appeal to the youth of Odumase to remain calm and exercise restraint, as the matter had gone far and they would have a positive outcome.