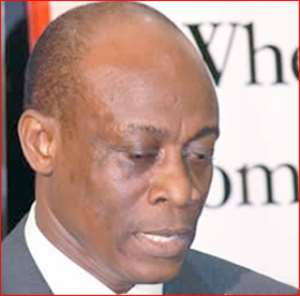 Fitch, the international credit rating agency, has downgraded Ghana from a B+ to a B, largely because of the country's handling of its wage bill.

Finance Ministry explained that the government recognizes that the largest issue it must address is the wage bill, which was a major reason behind last year's deficit and continues to limit our fiscal flexibility.

Below is a full statement

GOVERNMENT STATEMENT ON FITCH RATINGS DOWNGRADE
Today, Fitch Ratings changed Ghana's sovereign credit rating to 'B' with stable outlook from B+ with a negative outlook. The rating had been on negative outlook since February 2013, when Fitch took the decision to review Ghana's credit quality in light of issues that arose in 2012 and were analyzed in the Government's 2013 Budget. Unfortunately, despite the implementation of several measures to resolve the issues (e.g. the removal of subsidies) Fitch decided the issues remain significant enough to justify a lower sovereign rating.

This year has seen progress in fiscal consolidation after last year's deficit as part of the necessary steps to address long-standing issues that have plagued Ghana. The government has worked tirelessly to address the many challenges the country faces, all against a weak global economic environment (which recently resulted in significantly lower gold and cocoa prices) and a year-long power shortage due to the disruption of gas supply from the West Africa Gas Pipeline. Moreover, we have taken these actions with a balanced approach, mindful of the need to ensure Ghana's economy continues to grow.

Ghana's short- to medium-term prospects remain strong. The gradual increase in Ghana's oil and gas production (significantly higher this year, compared to 2012); value addition and diversification plan to boost agriculture, in particular; as well as a vibrant and growing services sector are still driving the projected annual economic growth rate of 7-8% over the medium term. It is in this regard that the government launched its 3-year fiscal consolidation plan to boost a very strong economic environment and outlook. Hence, despite the challenges it faced, Ghana's growth is expected to remain above a healthy 7 percent at end-2013.

We recognize that the largest issue we must address is the wage bill, which was a major reason behind last year's deficit and continues to limit our fiscal flexibility. Implementation of the Single Spine Salary System has been necessary but difficult. While it has entailed higher than expected fiscal outlays, it is nearly complete and will form the basis for a more controlled wage bill in the future. The improvement in Payroll systems and processes is part of the comprehensive public financial management (PFM) reforms being implemented. For 2013, annual wage increases were moderated to 10 per cent, compared to previous high levels and the near term goal is to comply with the Economic Community of West Africa (ECOWAS) Convergence Criteria on wage-to-tax and wage-to-GDP ratios. When our wage bill is controlled, we will have more fiscal space to implement pro-growth infrastructure projects.

Further, on the expenditure side, we have already taken the tough steps of minimizing the adverse impact of subsidies on petroleum products and utility tariffs on the Budget. While causing some short -term discomfort and inflation, we firmly believe this will both reduce the strain on the government's already stressed budget and also allow for more investment into the sector in the medium term. The Government intends to implement a more gradual realignment of petroleum and utility prices to minimize the distortions that are created by the previously large and infrequent adjustments. It is expected that capital expenditures will remain within the budget figures—and follow the moratorium on new projects and loans that are not exceptional or reflect known national priority.

In the revenue area, Parliament passed a fiscal stabilization income tax and import levies in July, to raise additional revenues over the next two years. These revenue measures will achieve their maximum impact in the second half of the year. While oil revenues have come on line and are above target, we have shown extraordinary prudence and a strong commitment to best practices in managing our oil revenue – continuing to put money in the petroleum fund as a buffer against future shocks. The Ghana Revenue Authority (GRA) reforms are ongoing to improve the revenue systems and processes to the status of a middle-income country.

Our debt strategy has been refocused to reduce the cost of government debt and to contain the growth in the debt stock. We have successfully issued a Eurobond that had lower interest costs than our domestic debt and have used the proceeds to refinance maturing debt. This year, we have initiated measures to make state-owned enterprises take responsibility for debt that was contracted by government for self-financing projects. We have also announced better management of self-financing commercial projects with recovery (escrow and on-lending) mechanisms to reduce the impact of project loans on the pure public or sovereign debt.

Our monetary situation remains controlled, despite lower gold prices. The increase in oil production and another strong cocoa harvest have boosted the balance of payments. Inflation is at the upper end of the target band but this is expected given the removal of petroleum subsidies and the recent upward adjustments of utility tariffs.

In conclusion, we hold a strong view that Fitch's downgrade does not sufficiently reflect Ghana's structural measures and deep reform efforts, notably in public financial management. These are being currently implemented to support fiscal consolidation. As we have often stressed, Ghana is not on a single-year adjustment plan since experience shows that such structural measures do not produce full results in a single year.

It is also important to repeat that Ghana's medium term economic outlook remains strong. We are targeting a 5-6% budget deficit in the near term while maintaining 7-8% growth. The current difficulties are an aberration and we are already showing signs of returning to the medium term targets we have set out. Despite the lower rating, the country is viewed as among the most friendly investment environments in Africa. According to the World Bank, we are also among the best governed countries in Africa.

These strengths, along with our diversified commodity engine, our strong services sector, and above all the hard-working Ghanaian people, make us confident that we have all the pieces in place for sustained economic growth to deliver prosperity for the country and return to the higher credit rating it deserves. END.

ISSUED BY THE PUBLIC RELATIONS UNIT
MINISTRY OF FINANCE