Right to Information not to hound politicians 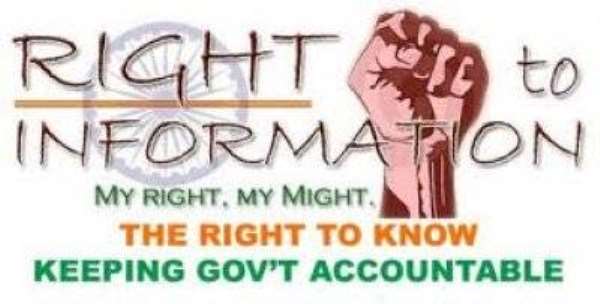 Ho, Oct. 17, GNA - The right of citizens to seek information on governance and other issues of concern to them is generally not to hound politicians or public servants over supposed corrupt practices.

Rather, the active exercise of that right, especially where it  has been properly documented, creates a policy-responsive society, as information represents the fuel that powers development.

Mina Mensah, Regional Coordinator, Africa Office of the Commonwealth Human Rights Initiative (CHRI) made this observation Wednesday in Ho at a training workshop on the Right to Information (RTI) Bill for selected people including tertiary students, Assembly Members and the media.

She said the availability or otherwise of information to people directly affects their well-being.

Ms Mensah therefore, expressed reservations about the slow approach of government and parliament to passing the RTI Bill into law in Ghana.

She said while government had given the undertaken to work with parliament for the bill to be passed, the approach from the executive and legislature, regarding the issue had been disappointing.

She stated that in 2010, the RTI Bill was presented to parliament, whose relevant working committee went round the country to collate views to inform work on it.

'But as I speak now it is difficult to tell where the Bill is at the moment and what changes have been made,' Ms Mensah said.

She said it was important the public clamoured for the Bill to be passed into Law, so that the challenges faced by other pro-human rights laws, such as the Domestic Violence Law and the Disability Act, would be avoided.

Ms Mensah suggested that there was the need to remove the blanket exemptions contained in the RTI Bill, shorten the time frame for information disclosure, review fees and also provide an independent enforcement and monitoring mechanism under the law.

She added that the RTI should be extended to private institutions and chieftains, and that sanctions should be prescribed for unnecessary delays to give out information.

Ms Mensah said additionally, the law should specify a maximum time limit for implementation and also compel both public and private bodies to carefully manage their information for easy location.

She said administrative fees that were charged for processing information should rather be lodged into accounts that could be accessed by implementing agencies, adding that such fees should not be put into the consolidated fund.

Ms Mensah called for the recruitment of Information Officers who will be trained and charged with dealing with requests.

Touching on its advantages, Miss Esther Ahulu, CHRI Project Officer observed that RTI was the 'heart of all rights' as it promoted transparency which, in turn, brightened investment prospects.

Other issues discussed at the workshop included processes of requesting for information.

Participants at the workshop were put into three groups to identify certain areas of concern and demand information from the appropriate bodies.

Miss Ahulu said the CHRI would monitor each group to ensure that requests for information were presented to appropriate bodies and the needed information retrieved.