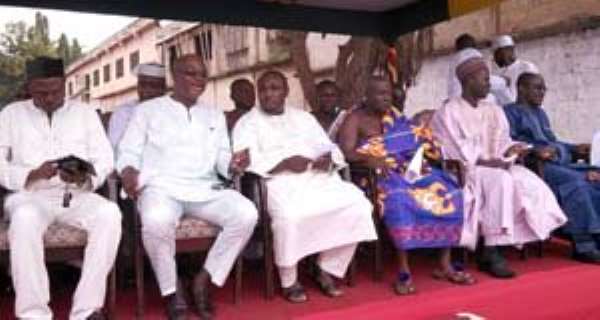 THE ASHANTI Regional Chief Imam, Alhaji Abdul Mumin Harun, has sternly cautioned Muslim youth in the country not to fall to any inducement to join terrorist groups since Islam frowns on bloodshed.

He expressed gross concern over the upsurge in the formation of terrorist groups on the continent, lately, stating emphatically that Islam is a religion of peace which had no connection with terrorism.

The Ashanti Regional Chief Imam gave the remarks at the Central Mosque in Kumasi yesterday shortly after Muslims in the city had prayed to mark the Eid-ul Adha celebration.

Alhaji Mumin said those behind the formation of terrorist groups on the continent were doing so for political reasons and their own selfish interest therefore Muslims, notably the youth, should not be lured into it.

Still debunking that terrorism has no links with Islam, the religion of peace, the Chief Imam said anybody that form terrorist group in the name of Islam 'is against Islam as a religion.'

According to him, Prophet Mohammed, who formed Islam, loves peace co-existence of all manner of people irrespective of their religious, financial, and social or any other consideration.

Alhaji Mumin therefore tasked all Muslims in the country to, in unison, kick against terrorism and play leading roles to protect and defend the good image of Ghana at all times.

As part of the celebration of the Eidul-Adha, a fat sheep was slaughtered by the Ashanti Regional Chief Imam shortly after the thousands of Muslims that had converged at the mosque had finished praying.

In his address, Hon. Samuel Yaw Adusei, the Deputy Ashanti Regional Minister, sternly cautioned Muslims to abstain from acts of violence, vengeance, backbiting and all other acts that could spark brawl and confusion.

The country, he stated, could only develop to the admiration of the masses when the citizenry lived in peace, so he charged the populace to jealously protect the peace and unity of the state.

Hon. Adusei commended Muslims for living in peace with other religious groups in the country over the years which had contributed in the peace being enjoyed in the country, urging them to sustain their good works.

The Deputy Minister admonished the citizenry to exercise patience, assuring them that the President Mahama-led administration had better plans to develop the country and better the lives within the shortest possible time.

He therefore tasked the populace to pay their taxes promptly so that the government could use it to embark on developmental projects, urging workers to refrain from embarking on strike to drum home their grievances.

Hon. Adusei admonished Muslims to educate their children so that they could become influential people in society and praised Muslims for the smooth manner in which this year's Hajj went.

The Asantehene's representative, Baffuor Asabre Ababio, Kogyawoasu, charged Muslims to continue to live in peace with other religious groups since the country could only be developed in a peaceful atmosphere.