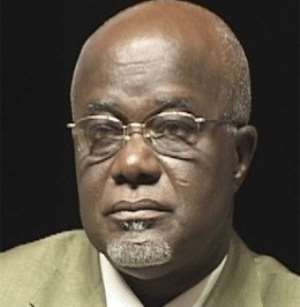 I don't need to frame-up my juniors to have them sacked! - Hackman The boy has confessed he was rather asked to implicate me – Dr. Manfo

“IT'S BUNKUM. I don't need to frame my juniors up to have them sacked” was the sharp reaction of Interior Minister, Hon Hackman Owusu, when reached on the allegations by Kakraba Korsah that he co-contracted him to implicate National Security Advisor, IGP and two others weeks ago in order to have them dismissed.

According to the Interior Minister, he could go and complain to President Kufuor that he did not want to work with the IGP, who was his junior, and the President would either transfer the IGP or find him the Minister another ministry to work at.

On the National Security Advisor, he indicated that he was his colleague whose post he was not interested in.

For him, he did not know who Kakraba was, except that he remembered being accosted by a young man who claimed he had some information of significance for him. Hackman said he listened to the information as an Interior Minister and referred it to the appropriate security agencies.

He claimed that he did not have any special relation with Dr. Manfo, except that Dr Manfo was someone who work under him.

Told that Kakraba claimed he (Minister) gave him ¢1 million as part-payment for the job at his Sikelele store at Tudu, the Minister denied it and suggested that anybody at all could have made those claims since it was public knowledge that he owned Sikelele.

But Dr K. K. Manfo admitted to this paper in an interview at his office Tuesday morning that he informed the Minister of the Interior about allegations that the IGP, ACP Kofi Boakye and some others within the police administration wanted him (Manfo) dead and had hatched a plan to kill him. The information, he claimed, came from the same Kakraba.

He said since the IGP was alleged to be part of the alleged plot to assassinate him, he could not go to the same man and report to him. That, he said, was why he opted to inform the Interior Minister.

He however had no problem and no interest in the Security Advisor's post, he said, and could therefore not have pitched himself against him.

He also admitted that he later asked Kakraba to go and see the Minister of the Interior when Kakraba requested that he should be paid huge sums of money for a recording of alleged proceedings of some meetings involving the Security Advisor, IGP, Deputy IGP and ACP Kofi Boakye.

He quickly added that he was not privy to whatever happened between Kakraba and the Interior Minister on the issue.

According to Dr. Manfo, he was in the house on September 29, last year when Kakraba came to him and introduced himself as Kojo Mensah. The then Kojo Mensah, he said, informed him that there was an orchestration within the top hierarchy of the police administration, especially by the IGP and the Greater Accra Regional Police Commander to get him out of the way since he was perceived by them as a threat.

According to him, Kakraba claimed to have taken part in meetings with the NDC, the IGP, his deputy and the Security Advisor to that effect and promised to assist him to outwit the alleged collaborators since he was perceived by him as a righteous man.

He said following persistent pressure on him by Kakraba, he told him to bring evidence to back his allegations, and that Kakraba brought him a report in which he perfectly quoted the number of people present at one such meeting and what each of the individuals reportedly said at the meeting.

“I then asked him to bring me a recording” since he was requesting for tape recorder. According to him he therefore gave Kakraba ¢150, 000 to acquire a recorder for that purpose but Kakraba came back to tell him that because of the national security status of the report, he would charge for it. “He then requested for ¢50 million, $5000 and a ticket and a visa outside Ghana to a destination of his choice” Dr Manfo said.

According to him, he then told Kakraba that he could not afford the amount he was demanding and directed him to see the Interior Minister on that.

Dr. Manfo suggests that Kakraba later kept on pestering him with information that his life was in danger and that there was an organised effort to attack him in his house.

According to him, it was during one of those visits to his house on the same issue that his wife who was worried by the alleged information offered to avail her recorder to Kakraba to get evidence of his claims. “But when I later realised that he was up to no good, I warned him not to step in my house again”, he said.

Dr Manfo said he never heard of Kakraba again till he heard of him having gone to the Daily Guide and later to the Concord with a story different from what he (Manfo) knew.

He said after much consultation he caused the arrest of Kakraba last weekend and that Kakraba confessed this past Saturday in the presence of eight witnesses that he was put up to the task of sullying his name and reputation by those he (Kakraba) had earlier informed him of. The alleged confession surprisingly was not taped, he admitted.

I'm grateful to be named by Forbes as African of the Year — ...
31 minutes ago

Covid-19: We oppose singling out African countries for trave...
31 minutes ago