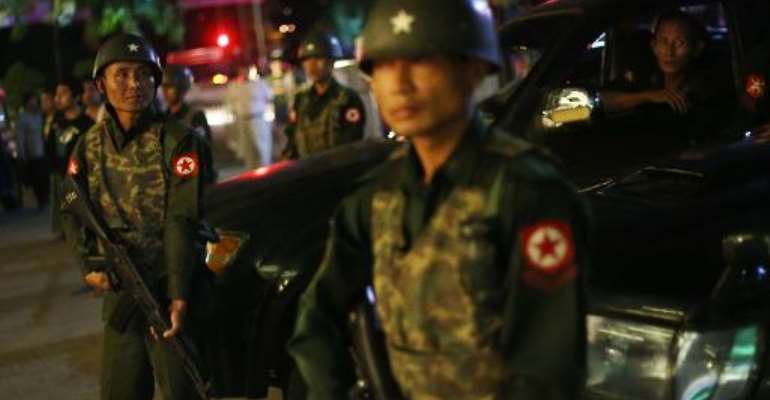 Yangon (AFP) - Myanmar was investigating Tuesday a suspected bomb blast at a luxury Yangon hotel that wounded a US woman, the latest in a series of explosions in the former military-ruled nation.

Authorities said the recent incidents could be aimed at derailing the country's pro-democratic reforms as it prepares to host a major regional sporting event and take the chair of the Association of Southeast Asian Nations (ASEAN).

The injured American was taken to hospital with wounds to her thigh and her hand after the blast ripped through a guest room at the Traders Hotel in central Yangon late on Monday, police said.

"We assume that it was a bomb blast but we are still trying to find out more information," a police official at the scene who did not want to be named told AFP.

Military officials and soldiers with sniffer dogs were seen at the hotel while shattered glass covered the road outside.

The hotel, part of the Shangri-La group, is located in the heart of Myanmar's commercial hub. It is popular with foreign tourists and visiting business people.

The incident followed a series of earlier bomb blasts but it is not clear who is behind them.

A man and a woman were killed and another person injured in an explosion Friday at a guesthouse in the town of Taunggu, about 65 kilometres (40 miles) from the capital Naypyidaw, police said.

Two other devices exploded in Yangon on Sunday -- one at a bus stop and another under a truck, which wounded two teenagers, according to authorities.

Two more makeshift devices were found in the cities of Yangon and Mandalay on Monday.

"We cannot say who is responsible for these acts," said Police Lieutenant General Min Aung of the Myanmar Police Force's intelligence and security department.

"We're still investigating. The system they used is the same in all the cases. We think an organisation or a person planted them all," he told AFP by telephone from Naypyidaw on Monday, speaking before the blast at the Traders Hotel.

Bomb blasts were relatively common under the former junta, which usually blamed the explosions on armed exile groups or ethnic rebels.

But such explosions had become rare under a new quasi-civilian government which took power in 2011 promising political reforms and efforts to end long-running ethnic insurgencies.

"I think that someone or some organisation asked some people to explode the bombs," he told Radio Free Asia's Myanmar Service, saying they had done it "with the intention of making people worried and scared".

"I think that the explosions may have been timed to coincide with Myanmar becoming the chair of ASEAN and getting ready to host the Southeast Asian Games, to make the international community misunderstand the situation of stability and peace in Myanmar," said Ye Htut.

Myanmar last week officially assumed the chairmanship of the ASEAN regional bloc for 2014. In December it will welcome athletes and sports fans to Naypyidaw for the Southeast Asian Games.

In a message posted on its official Facebook page, the Yangon police appealed to people to be vigilant for any suspicious objects at railway stations, bus stops and other public places.

"We also urge people to cooperate to find those causing unrest and casualties with explosions," it said.

President Thein Sein's reformist government has reached tentative peace deals with the major ethnic minority rebel groups in the country, which has been wracked by civil wars since independence from Britain in 1948.

But the nation has been hit by several outbreaks of Buddhist-Muslim religious violence since June 2012 that have left about 250 people dead and more than 140,000 homeless, mostly Muslims.