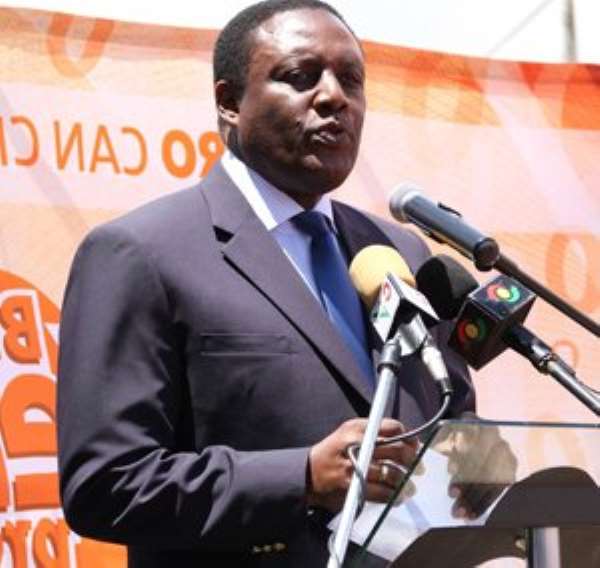 Fidelity Bank Ghana Limited, one of the fastest growing banks in the country, has held the first monthly draw of the much-touted 'Big Fat Zero' promotion.

It was held at the bank's new Nungua Branch in Accra last Wednesday.

At the event, the Deputy Managing Director of the Bank, Jim Baiden announced that his outfit had expanded its network to 46 branches nationwide.

On Wednesday, August 21, the Big Fat Zero promotion, sanctioned by the National Lottery Authority (NLA) under Act 722, was launched at the bank's headquarters at Ridge, Accra.

It is expected to end in December 2013.
As part of the promotion, customers are required to maintain a minimum balance of GH¢300 for a month to be automatically selected for a single draw while those who maintain a deposit of GH¢1,000 and above stand the chance of winning big.

At the maiden draw, Mr. Baiden said the bank was pursuing a programme of financial inclusion and a number of initiatives geared to ensure active participation of consumers in banking.

'These long-term initiatives are critical components of the bank's national development agenda,' he said, adding that 'at the heart of the Fidelity Bank story is a deep desire to impact the lives of Ghanaians.'

He said the promotion, which is under the general theme: 'A Zero Can Change Your Life, represents a new idea in consumer promotions in the banking industry.

He said the promotion was designed to reward new and existing customers of the bank, adding 'the purpose of this promotion is to attract new customers into our banking family, and also to give existing customers the chance to be rewarded for their continued custom, and their faith in us.'

Touching on the persistent expansion, Mr. Baiden said 'Fidelity Bank's branch expansion across the country is part of our strategy to enhance access to financial services and bring banking services to the doorsteps of Ghanaians, and it is now the fourth in the country in terms of number of branches.'

He said that out of an adult population of over 15 million people, only 35 per cent are banked, and added that 'there is a dire need for financial institutions in Ghana to address the issue with strategies and initiatives that will bring more people into mainstream banking system.'

'Ghanaians are known to be enterprising and industrious, and that Fidelity Bank recognizes that importance and the need to empower its existing and potential customers, not only to pursue their dreams and aspirations, but also to have the financial means to cater for the basic necessities of life.  We can do that when we give them the purchasing power to attain it.

'Beyond this, the promotion will enable the bank to have access to a bigger pool of deposits with which it can support the nation's growing SME base.  Our objective is to be able to support business investments with low cost lending which should have multiplier effects, including increasing employment in the country,' Mr. Baiden added.

Fidelity Bank Ghana Limited currently operates in nine out of the 10 regions in Ghana, with a customer base of over 400,000 and 1,500 employees.

It started operations in Ghana in October 2006 after years of operating as a discount house.

The Bank has been recognized as the Best Growing Bank in recent times.