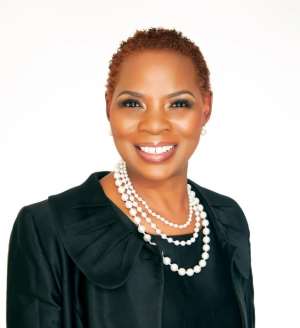 New York, USA - Monday, October 14th, 2013: Justina Mutale, African Woman of the Year 2012 and Founder/CEO of POSITIVE RUNWAY: Global Catwalk to Stop the Spread has won the Award for Professional Leadership in the 2013 MWAPE PEER AWARDS, which took place on Saturday 12th October 2013, at Sheraton Lincoln Harbor Hotel, New Jersey near New York in the USA.

Listed in the Worldwide WHO's WHO Directory of Distinguished Individuals, Ms Mutale is the Honorary Ambassador for Gender Equality and Spokesperson for the International Women's Think Tank. She is featured as a CFI Hero in the Capital Finance International (CFI) Journal, which brings coverage and analysis of the drivers behind change by combining the views of leading multilateral and national organizations with thought leadership from some of the world's top minds.

A recipient of numerous awards from around the world, Ms Mutale was honoured as African Woman of the Year in 2012 on the same platform and Award Ceremony at which the President of Malawi, The Rt. Hon. Joyce Banda and the former female Deputy Prime Minister of Zimbabwe were also nominees in the African Achievers Awards hosted by the African Institute of Leadership and Management in association with Kings College of London.


A regular Speaker at various fora that discuss social, economic, political and gender issues, Ms Mutale has been featured in the same television programme as British Prime Minister, David Cameron talking about poverty and world hunger. She has also addressed the U.S. National Congress of Black Women, which has been previously addressed by both the U.S. President Barack Obama and the First lady Michelle Obama.

Ms Mutale is also featured in the BLACK 100+ Hall of Fame, an Exhibition and Legacy of the top 100 Black Achievers in modern Britain. She is one of only 13 women to be featured in a UK Television Series on Eminent African Women and in a book on women who are contributing to sustainable development of the world published in Paris; and another titled: “Women who Changed Africa”, published in New York.

A Philanthropist; International Speaker; Humanitarian; HIV/AIDS & Human Rights Activist Ms Mutale serves as Patron, Ambassador, Trustee and Board Member of several other humanitarian, community and charitable organizations in the UK and overseas. She has served as Diaspora Ambassador & Spokesperson for the ENOUGH FOOD FOR EVERYONE IF Campaign to end world hunger and is a Civil Society delegate to the United Nations General Assembly on the High Level Dialogue on International Migration and Development.

POSITIVE RUNWAY: Global Catwalk to Stop the Spread, is a worldwide HIV/AIDS response campaign which aims to bridge the gap in the global efforts to stop the spread of HIV/AIDS and has presence across the globe featuring its signature Red Ribbon Models.

The organization is registered on the United Nations Department for Social and Economic Affairs Civil Society Database, and is also a member of the ENOUGH FOOD FOR EVERYONE IF Campaign, a coalition of leading UK development organisations working to end world hunger.

A symbol of Excellence, the Mwape Peer Awards recognizes individuals in Africa and the African Diaspora who have played pivotal roles in their communities. Winners are selected by a distinguished Selection Committee of peers who are experts in their fields to reflect the significance of the roles that the nominees have taken in their respective fields.