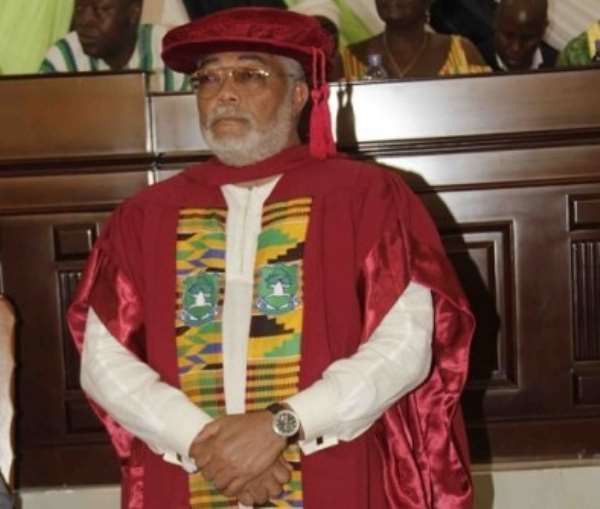 Former President Jerry John Rawlings has been honoured by the University for Development Studies (UDS) for his contribution towards the establishment and growth of the university.


The honour comes in the form of an honorary doctorate degree and the erection of his bust on one of the campuses of the university to immortalise his role in the establishment of the institution.

At a special congregation of the university on its Tamale Campus on Saturday, former President Rawlings looked very elated by the recognition which was denied him about eight years ago, apparently because of political polarisation in the country.

He was decorated with an academic gown by the Chairman of the UDS Council, Dr Abdulai Salifu, assisted by the Vice-Chancellor of the university, Professor Haruna Yakubu, while President John Mahama, who graced the occasion, presented the citation accompanying the degree.

The bust to be erected at the entrance to the Nyankpala Campus of the UDS in Rawlings's honour was also unveiled at the central administration block of the UDS.

The ceremony, which attracted a large audience, including former and current ministers of state, parliamentarians, chiefs and members of academia, was witnessed by former President Rawlings's wife, Nana Konadu Agyeman Rawlings, and some members of their family.

An earlier attempt by the UDS to honour President Rawlings in March 2005 was allegedly scuttled by the UDS Council of that time, chaired by Mr Charles Daniel Gyimah.

Among the reasons given by the then chairman was 'national security considerations'.

President Mahama described the action of the then council as most unfortunate, as the decision to cancel the ceremony was a 'great disservice to the nation'.

'My hope is that the faculty and students used to scuttle this same event many years ago have today grown up and understood the disservice they did to this great institution,' he stated.

According to him, the ceremony was significant to right a wrong that was inflicted on the UDS some eight years ago and that the honour bestowed on the former President was not only 'fitting but I dare say it is eight years too late'.

Dr Abdulai described former President Rawlings as an inspirational leader whose vision and dedication informed his decision to establish the premier university in the north in 1992, during his term as President.

He noted that that singular effort by the former President had helped turn the dreams of many students into reality, as evidenced by the number of graduates the university had churned out since its establishment.

Bold political decision
The chairman indicated that apart from the bold political decision by President Rawlings to establish the university, he also took personal interest in its welfare by donating the Hunger Project cash prize of $50,000 he won in 1993, as seed money for the progress of the UDS.

'The establishment of this university by your government did not only mark the reconstruction of education in northern Ghana but also helped tremendously in improving the socio-economic development of this area and the nation as a whole,' Dr Abdulai acknowledged.

He added that 'as a distinguished graduate of this university, we hope and believe that you will further offer your support in championing the cause of the UDS to enviable heights'.

Prof Haruna said the UDS, which marked its 20th anniversary last year and started with only 40 students, could now boast a student population of over 21,000 scattered among the four campuses of the university in the Northern, Upper East and Upper West regions.

He described the ceremony as an important landmark in the annals of the UDS and the cementing of the relationship between the former President and the university.

The vice-chancellor assured the former President that 'your vision for establishing this university is on course'.

Show of appreciation
Standing elegantly and beaming with smiles in his academic gown, Dr Rawlings expressed appreciation to the UDS for the honour done him and his family.

'I am certain that the UDS will also be counted as one of the institutions which have been true to the commitment of a people-centred development agency. This is why I am proud to be the latest alumnus of this university, proud to be honoured by you and honoured to join your peer group,' he stated.

He described as commendable the unique system of studying in the UDS, where a third trimester field practical programme formed part of an integral part of the curriculum.

This ensures that both students and staff work closely with the disadvantaged in remote communities to improve lives.

Admonition
'Be true to the community spirit and ensure that every effort is made to maintain the voices, perspectives and rights of the community throughout your journey,' the former President admonished.

Dr Rawlings further observed that the multi-campus nature of the UDS had helped in fostering harmony and unity among staff and students and also afforded them the opportunity to learn about one anothers' culture and also respect their identities.

He cautioned the authorities not to lose focus in the university's vision and mission and advised the students to serve as transformational leaders in their respective communities to bring about the needed change.

The Asantehene, Otumfuo Osei Tutu II, who was represented by the Akyempinhene, Oheneba Adusei Poku, donated GH¢15,000 as an endowment fund for attaining academic excellence in the university.