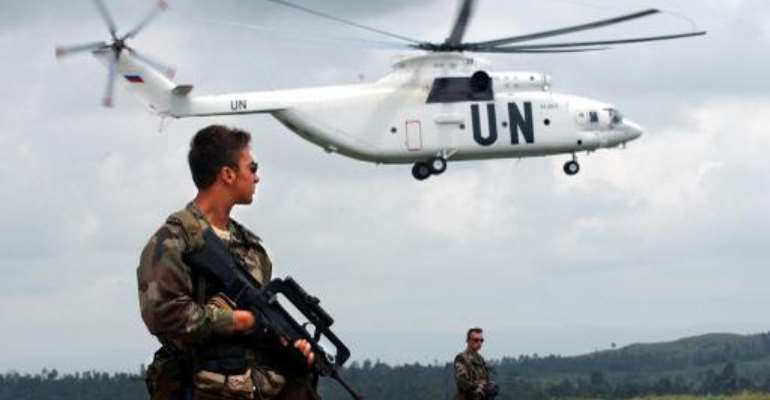 A UN French special forces soldier watches over the situation while a UN helicopter lands on June 10, 2003, on Bunia airport in the Democratic Republic of Congo. By Eric Feferberg (AFP/File)

"I learned with deep concern that a MONUSCO helicopter came under direct fire from positions held by the March 23 (M23) rebel movement in the Rumangabo region," Robinson said in a statement.

"I strongly condemn this serious incident that threatens the security of MONUSCO personnel," she said.

The UN official reminded the rebel leaders "that any act aimed at obstructing MONUSCO in the exercise of its mandate, as stipulated by the United Nations Security Council resolution 2098, is unacceptable."

The rebels from the M23 movement fired Friday afternoon at a UN military helicopter conducting surveillance in the Rumangabo region of eastern Democratic Republic of Congo.

They admitted there had been a major incident.

According to MONUSCO, the unarmed helicopter hadn't flown any lower than usual" when it took several dozen shots.

Rumangabo, in the resource-rich but unstable province of North Kivu, is near an important military base occupied by the rebels and around 40 kilometers (25 miles) north of the provincial capital, Goma.

M23 launched a mutiny against the DR Congo government in North Kivu in early 2012 and for a while seized the major eastern city of Goma. The UN has sent an offensive intervention brigade to the region to battle M23 and other armed groups, forcing the rebels away from Goma.