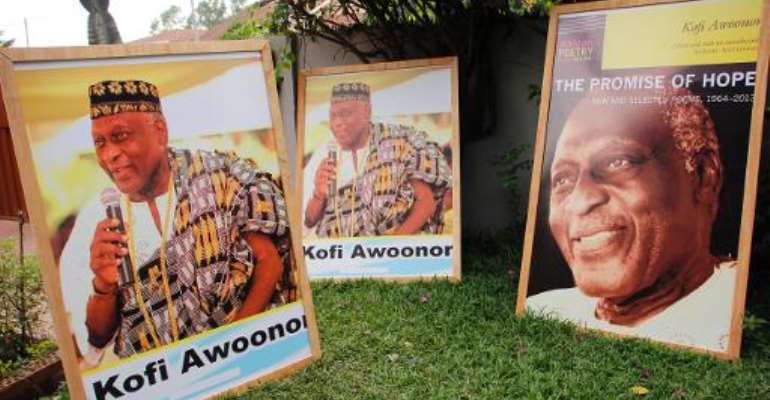 Pictures of Ghanaian poet and statesman Kofi Awoonor are displayed outside his house in Accra on September 30, 2013. By Chris Stein (AFP/File)

Accra (AFP) - Mourners paid tribute Friday to renowned Ghanaian poet and statesman Kofi Awoonor, who was killed last month in an Islamist attack on a Kenyan mall, at a funeral attended by Ghana's president and other dignitaries.

Awoonor, 78, was killed and his son wounded during the September 21 attack on the Westgate mall in Nairobi. He had travelled to the Kenyan capital to participate in a literary festival.

The funeral opened with dancing and songs in Ewe, one of the nation's main languages, said an AFP correspondent.

Mourners from Awoonor's hometown of Wheta in eastern Ghana filed into the hall with kerosene candles on their heads, then performed a traditional Ewe funeral dance, wearing black and red mourning colours.

Known in Ghana both for his sombre, reflective poems and his stints as an ambassador and adviser to Ghana's presidents, Awoonor's death shocked a nation unaccustomed to being affected by war and terror.

Awoonor was known internationally for writing poetry inspired by the rhythms of the Ewe language, which is widely spoken in eastern Ghana and some neighbouring west African countries.

"He composed music and danced. He was a true Ghanaian," said Koku Anyidoho, who led the funeral service.

Awoonor was Ghana's representative to the United Nations under Rawlings from 1990 to 1994. He was also president of the Council of State, an advisory body to the president, a post he left earlier this year.

Much of his best work was published in Ghana's immediate post-independence period, part of which he spent in exile after the nation's first president and post-colonial icon Kwame Nkrumah, with whom Awoonor was close, was overthrown in a coup.