Stars Get Bonus Boost Against Pharaohs 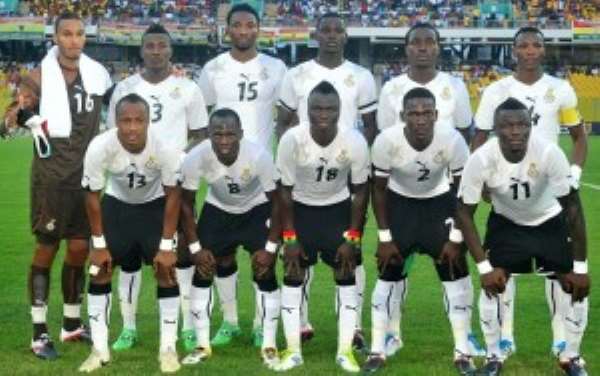 Ghana Black Stars has received a major boost ahead of their 2014 FIFA World Cup playoff first leg against Egypt next Tuesday.

The team's bonus has seen a 50-percent increase, taking it to 15,000 US Dollars for a win against the Pharaohs on Tuesday, October 15 at the Baba Yara Stadium in Kumasi.

This was announced by President of the country, John Dramani Mahama, when he visited the team at their training session on Wednesday at the national stadium in Accra.

'Whatever we should do to support you to win this match, we shall do and that is why you've been informed already that your bonuses have been topped up already, everything is under control and so we will do our bit,' Mahama said.

The President also assured the team of the country's support in their quest to take a giant leap towards a place at next year's World Cup in Brazil. The Black Stars has since arrived in Kumasi to fine-tune for the crucial match.

Ghana is seeking to complete a hat-trick of appearances at the Mundial after impressive outings in 2006 (Germany) and 2010 (South Africa). In both cases, they came out the as the best African representatives, reaching the second round in Germany and the quarters four years later at the ever World Cup on African soil.

The Black Stars have been dealt a major blow with midfielder Kevin-Prince Boateng ruled out of the game due to injury.

Meanwhile, Egypt are said to arrive in Kumasi on Saturday, October 12 for the first leg encounter. The second leg will take place on November 19 in Cairo with the winner qualifying for the World Cup.

Sunday 13 October is set to bring the Ethiopian capital Addis Ababa to a standstill as hosts the Walyas take on Super Eagles of Nigeria in the first leg of the 2014 FIFA World Cup playoff. Both sides have been in a confident and in fighting talk ahead of the encounter.

Ethiopian coach Sewnet Bishaw says Ethiopia will have to make do without injured Getaneh Kabede, a key striker to the team.

Ethiopian player Minyahil Teshome was quoted saying that victory for the home side was certain and the team was thinking big and beyond the playoffs. “In fact, we are already seeing beyond Nigeria, it is the World Cup we are preparing for, where we hope to play against Spain and Argentina on the field' he told Supersport.com.

Nigerian defender, Solomon Kwambe believes Super Eagles will return victorious, “Victory is written on everybody's faces, and all the players are smiling indicating that fortune will smile at us on Sunday. The mood in camp and among the players is charged with anticipation of resounding victory against Ethiopia in Addis Ababa'

“We're the African champions and we must demonstrate the stuff that made us African kings in whatever and wherever we see ourselves, we'll surely triumph against the Ethiopians,” said Kwambe.

Nigeria will host the 2nd leg of the playoff on November 16 at the UJ Esuene Stadium in Calabar, with the aggregate winner qualifying for the 2014 FIFA World Cup in Brazil.

Cote d'Ivoire coach Sabri Lamouchi has reiterated that the qualification for the 2014 FIFA Cup in Brazil remains the dream of all Ivorians.

The Elephants are seeking to make their third successive appearance at the biggest stage in world football after 2006 (Germany) and 2010 (South Africa), and Lamouchi says the desire to reach to Brazil is a national interest.

Lamouchi, 41, has observed that the driving force for his team has been the huge support by the entire populace. The Ivorians face the Teranga Lions of Senegal in the first leg of the playoff on Saturday, October 12 in Abidjan and the Frenchman is hoping the support of the fans will spur them on to a convincing result against their old foes.

There is so much tension engulfing the game after a previous meeting between the two sides in a 2013 Orange Africa Cup of Nations qualifier in Dakar ended abruptly due to crowd violence. The Ivorians were subsequently declared winners of the tie and went through to the final tournament in South Africa where they were ousted at the quarter-finals by eventual winners, Nigeria.

For Lamouchi, the best outcome remains a win in this weekend's encounter to make the second leg a mere formality. 'The ideal scenario will be victory and not conceding. It will be a tight and complicated game. The elements to make the difference will be concentration and determination.'

Veteran defender Kolo Toure and midfielder Max Gradel have been recalled into the Elephants squad for the crucial game after being sidelined for the previous qualifier against Morocco last month. The second leg will take place on November 16 in Casablanca.

Cameroon's recent footballing history has been plagued by internal strife, much of it revolving around superstar Samuel Eto'o, whom the federation issued with a lengthy ban. The Chelsea striker played against Libya, but his future in the team remains uncertain as he has indicated that he is keen to concentrate on club football.

Eto'o is one of the issues that Finke approaches cautiously. “The most important thing is that such issues are not discussed publicly. Constant discussion just aggravates the situation, which can best be solved if the parties deal with it behind closed doors,” he explained.

“If you want to make things better, it is always the case that those involved talk about things between themselves only.”

The good news is that the Chelsea striker,   Samuel Eto'o, has reversed his decision to retire from international football, pledging to join up with Cameroon http://www.fifa.com/worldcup/preliminaries/africa/teams/team=43849/index.html for next week's 2014 FIFA World Cup Africa Zone play-off in Tunisia.

His u-turn will be welcome news to the Indomitable Lions who face Tunisia in Rades on 13 October followed by the return leg in Yaounde on 17 November.

“You can have all the problems in the world but you have to see out your mission,” the 32-year-old told Cameroon http://www.fifa.com/worldcup/preliminaries/africa/teams/team=43849/index.html state radio. “And this time it's to join my teammates in Tunisia and return with a good result.”

He will link up with the national squad in the French Cote d'Azur resort of Nice on Wednesday to prepare for the match.

Although the Carthage Eagles of Tunisia only made it to the final round after their 2-0 defeat against Cape Verde in their last group match was overturned due to a suspended player, Finke expects a tough game.

Burkina Faso coach Paul Put has dismissed suggestions that Algeria appear more favoured after they were drawn against the North Africans on Monday for the 2014 World Cup qualifying knockout stage.

Put, who led the Stallions to second place at the 2013 Africa Cup of Nations in February, said both teams have equal chances in the two legged tie, even though the West Africans are to play host first.

'I agree that Algeria are a great side but I can tell you that the chances are equal for both sides at this level of the World Cup qualifying,' Put said after the draw.

'The draw is quite balanced and what we need to do now is prepare to face the Fennec Foxes as a strong opponent and not just an adversary. Believe in us. We have as objective, qualifying for our first World Cup finals and this will likely happen against Algeria.'

Both sides met last in June during a friendly in the Algerian city of Blida, with the home side carrying it off at 2-0.

The Black Stars of Ghana
http://thechronicle.com.gh/wp-content/uploads/2013/10/Elephnats-of-Cote-dIvoire.jpg