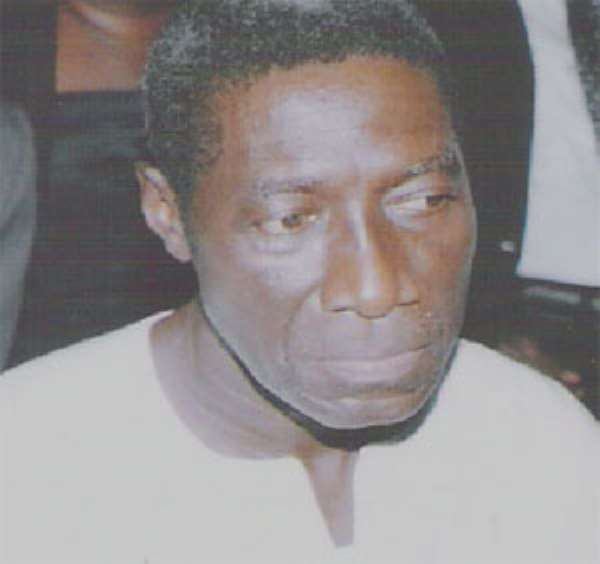 __Nana Ampadu, Ghanaian musician
Last month, in keeping with the great injustice and ultimate tribulations which the world has come to witness three mighty tragedies hit the African continent.

On September 21, 2013, the Somali militant group al-Shabab dealt a mighty blow to the conscience and security of the African continent when its militant fighters raided the Westgate Mall, one of the most famous shopping centres in Nairobi, the Kenya capital, resulting in the death of 68 innocent persons of various nationalities including Ghana and causing injury to a score of equally innocent persons.

In another sad and picturesque tragedy, a group of illegal socio-political economic migrants fleeing from economic deprivation, political intolerance and social injustice in a non-sea worthy boat got drowned in the Mediterranean Sea close to an Italian island of Lampedusa.

Most of the over 200 illegal migrants who perished in that sea tragedy came from Eritrea.

There is one fact common to all the three countries - ingrained corruption in political and public lives of the citizens at all levels and in all institutions in those countries at the top hierarchy of leadership.

Today on the African continent, if any independent minded person should rate official and unofficial corruption within the political and public systems of Africa, four countries are likely to be on top - Ghana, Nigeria, Eritrea and Kenya. What I am intimating is that Ghana is simply waiting for its Westgate, Boko Haram and Lampedusa to happen. Indeed the alarm bell attached to the time bomb of Ghana's Westgate, Boko Haram and Lampedusa started ticking the moment the Provisional National Defence Council (PNDC) headed by Flt-Lt J.J. Rawlings created pseudo-economic corrupt looting gang machinery under political pretences called the National Democratic Congress (NDC) to loot and share the nation's wealth.

For 19 years, Ghana operated under a combined terrorist regime with absolute power and Machiavellian constitutional arrangement where power resided in the bosom of one family.

After a brief interregnum of eight years, the political chicanery was re-enacted and re-installed with massive venom and vindictiveness and vengeance.

The political rascality, the social tomfoolery and  the economic looting and sharing were redefined and placed in the hands of the Godfather and the Kingmaker, who created this Frankenstein monster clothed in Don Quixotic antics.

Today self-confessed palm wine tappers, persons who never signed pay vouchers before, persons who have been convicted by competent courts of jurisdiction for proven criminal offences constitute the political bulwark and negotiating teams of this country.

What did Prof. James Watson say about the African? 'Today all our social policies are based on the fact that their (black people) intelligence is the same as our (white people) - whereas all the testing says not really.

It has never happen in the history of any country in this modern era where within five years, a country's debt can blossom from Gh¢9 billion cedis to Gh¢43bilion with nothing to show while for a period of nine months since the beginning of the year no statutory allocations to state institutions have been paid.

This does not include the heavy inflow of revenue in form of draconian and idiotic taxes which are levied on the poor suffering citizens of this country. Monies which should have gone to create jobs, provide social amenities like health, education, electricity, water and road facilities are looted and shared with impunity among the ruling NDC looting corrupt gang.

Today take a drive on any of our roads in the towns and the common sight you come across is a combination of able-bodied small and young adult boys and girls spending indeterminate time selling indeterminate products to indeterminate customers at roads intersections and traffic lights.

These are persons who should either be continuing their formal education at the senior high school level, or acquiring skills in our technical and vocational institutions, or pursuing knowledge in our universities and polytechnics or should be gainfully employed in the formal and informal sector. All of them do not have any hope of recovery.

To come forward, all they require is an implement like chisel, hatchet, screw drive, a blunt cutlass, crudely manufactured-local pistol watered by the pent-up feeling boiling within them and obviously consuming all their sense of justice only to be replaced by the sense of injustice and corrupt the incompetent leaders have implanted to them.

The people, who perished at Lampedusa, took a soft option. They were cowards at worst and pacifists at best. They should have taken on their leaders who had enslaved them rather than running away on a path of great danger and uncertain future.

The leadership of al-Shabab and Boko Haram are intelligent educated focused persons. The persons who do the actual killing for them are the down-trodden, persons consumed by injustice, persons who do not have any hope in life. They are indoctrinated to believe that death is the only course left for them and that it is better for them to die but in the process take others along with you.

They have captured the political and economic power and using them to enslave the rest of the nation. The suicide bombers amongst us can be found at traffic lights and road intersections. They are increasing in number everyday. The time bomb has been ticking. Nobody is paying attention to it.

Can one imagine how through the act of an individual, the number of seats in parliament was increased from 200 to 275 with acquiescence from the docile public?

Is anybody aware of the number of presidential staffers the taxpayers are looking after?

Why should we maintain an economic guzzling institution like the Council of State, which is a complete drain on the economy?  And to add insult to injury, a former senior citizen, who has been there before and should have known better suggested that the nation should create an upper chamber.

This is where I stand up for Prof. James Watson. Look at the constitution of the Council of State, a body close to an upper chamber without any accountability to the citizens and yet is maintained through the sweat of the citizens.

From the beginning of the 'Fourth Republic' the people who have populated the Council have been retired army and police officers already enjoying sumptuous pensions, senior public officers in top public service positions, traditional rulers presiding over the wealth of the people without accounting to the people they lord over, discarded politicians with no defined agenda for the ruling party and the nation but who must be maintained by the state at all cost.

The wastage in the system occasioned by greed, corruption, ineptitude, impunity, and incompetence proves beyond all reasonable doubt that we do not have to look outside our borders to look for Westgate or Boko Haram or Lampedusa. We have many of them within our borders.

Today if we mourn an academic intellectual of a giant like Professor Kofi Awonoor, my greatest regret is that many of the people who are mourning him must be quiet oblivious of the high intellectual height he reached.  One fact keeps on popping up all the time in various tributes to him.

Prof. Kofi Awonoor for four years was the Chairman of the Council of State.

Many people will be mourning him as one person who presided over a clearly wasteful national institution; the funds allocated to it could have been better used to ameliorate the potential army of al-Shabab militants we have created and continue to create in our midst in this country, the counterpart militants in Kenya, who gunned him down without batting an eye.

Do we have to wait for it to happen here before we wake up from our deep slumber? When will the leadership put patriotism ahead of personal selfish interest? I pause for an answer.

What did the poet of old write?  'Yesterday a monarch he; today subject of the flees. Why such boastings or man!'