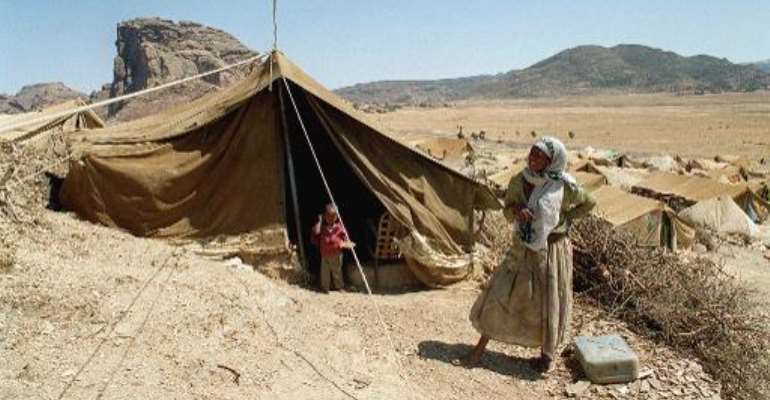 Eritrean civilians living in camps close to the town of Senafe, near the border with Ethiopia on March 1, 2002. By Anthony Morland (AFP/File)

Geneva (AFP) - Human rights abuses in Eritrea must receive greater attention after the boat tragedy off Italy that claimed the lives of over 300 people fleeing the Horn of Africa, an exiled campaigner said Wednesday.

"The abuse in Eritrea is high level. You can see how many refugees per day are fleeing the country. What happened in Italy, in Lampedusa, it's a result of the human rights abuses," human rights campaigner Tsedal Yohannes said from Geneva.

"I appeal to the international community to find a way of putting pressure in order to improve human rights in Eritrea," she said, calling for tough financial sanctions against the county's elite.

"I believe Lampedusa will be a turning point," she added.

Most of the victims of last week's shipwreck off the Italian island of Lampedusa were Eritreans or from conflict-torn Somalia.

Rescuers pulled 155 survivors from the waters of an estimated 500 on the ship. The scale of the disaster has sparked soul-searching in Europe about asylum and immigration policies.

Some 20,000 people are thought to have perished over the past 20 years on the perilous Mediterranean crossing, often in overcrowded fishing boats or rubber dinghies.

Yohannes contrasted Europe's reaction to the tragedy with that of Eritrea.

"The shocking thing is that up to now the (Eritrean) government haven't recognised the victims as Eritreans. In their media, they say 'illegal African immigrants'," she said.

"They haven't even declared a national mourning day. The Italian government have declared that, but in Eritrea it's as if nothing happened, business as usual."

The UN estimates that several thousand Eritreans a month flee their homeland of five million people, ruled since 1991 by President Isaias Afewerki.

Yohannes is the sister-in-law of Petros Solomon, who along with 10 other Eritrean lawmakers was arrested without charge in 2001 after calling for democratic reform.

In tears, she explained that none of the detainees' families know if they are in jail or dead. Solomon's wife, her sister, has also been missing since she was arrested in 2003.

Yohannes, who fled Eritrea in 2002, now lives in London and is part of the Citizens for Democratic Rights in Eritrea based there.

Ann Clwyd, a British MP who monitors the global treatment of lawmakers for the Geneva-based Inter-Parliamentary Union, said Eritrea had ignored repeated requests to clarify the detainees' fate.

"There's this complete wall of silence," she said.