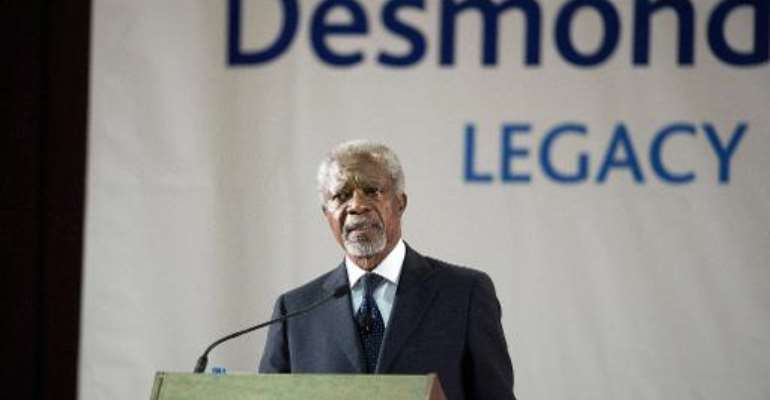 Cape Town (AFP) - Former UN secretary-general Kofi Annan said Monday it would be a "badge of shame" for Africa if its leaders voted to leave the International Criminal Court.

Speaking in Cape Town, Annan said "quite a few leaders are resisting and fighting" the ICC but cautioned on a vote against the tribunal without an alternative.

"If they fight the ICC, vote against the ICC, withdraw their cases, it will be a badge of shame for each and every one of them and for their countries if they do that," he said.

Annan denied claims by African leaders that The Hague-based tribunal was targeting the continent and accused them of protectionism.

"Let me stress that it is the culture of impunity and individuals who are on trial at the International Criminal Court, not Africa," said Annan, delivering the annual Desmond Tutu Peace Lecture on the South African icon's 82nd birthday.

Amid growing opposition to the ICC, the African Union is set to debate the continent's relationship with the world's first permanent court to try genocide, war crimes and crimes against humanity at a special summit on Friday and Saturday.

The ICC was a place of last resort that would not be needed if local courts were competent to try the cases, said Annan.

"But when we hear the debate going on, the leaders are protecting themselves. No-one speaks for the victims," he said.

The meeting follows the 54-member bloc's accusations that the court singles out Africans for prosecution, pointing to the high-profile trials of former Liberian president Charles Taylor and top leaders of Kenya.

But Annan said this was "not the case", adding he had been proud that so many African countries with weak judicial systems had given strong backing to the ICC.

"I am therefore concerned by recent efforts to portray the Court as targeting Africa. I know this is not the case," said the Ghanaian diplomat.

Four of the cases before the ICC had been referred by African leaders themselves, while the UN Security Council had moved on two others concerning Darfur and Libya, Annan said.

The trial against Kenyan Deputy President William Ruto started in September, and President Uhuru Kenyatta's case will begin in November.

Both are charged with stoking violence after a disputed 2007 presidential election.

The AU has called for the ICC to drop the crimes against humanity trials of the leaders in Kenya, where lawmakers have voted to withdraw from the 10-year-old court.

Annan also warned that "serious challenges remain, and new threats are emerging" despite the region's fast economic growth and social gains in areas like health and education as well as the growth of democracy.

"But real and exciting as progress has been, we cannot afford to become complacent. After all, Africa has endured false dawns in the past."

"Despite Africa's extraordinary wealth of natural resources, poor governance and a lack of transparency have too often led to corruption, exploitation and environmental damage."

He also signalled out a "winner takes all" approach in elections, saying leaders' individual interests had been too often "misconstrued as interests of their country".

African countries account for 34 of the 122 parties to have ratified the Rome Statute, the court's founding treaty, which took effect on July 1, 2002.