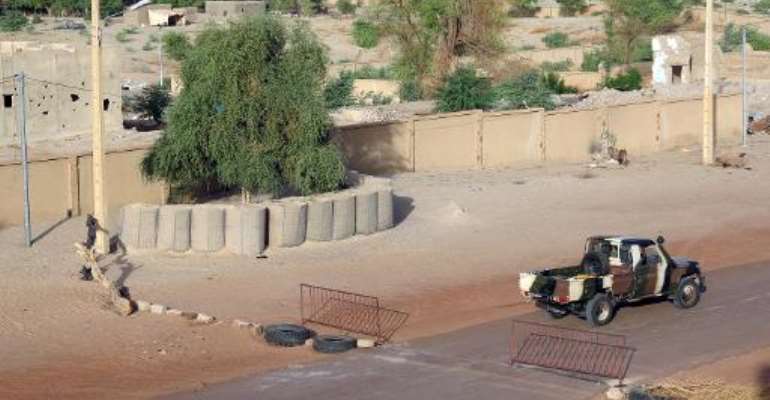 A Malian military vehicle drives past a checkpoint on July 26, 2013 at one of the entrances to Timbuktu. By Dorothee Thienot (AFP/File)

Bamako (AFP) - Militants launched rockets in a night attack on the Malian desert caravan town of Timbuktu without managing to hit any of their targets, military sources told AFP on Monday.

A senior Malian army officer contacted in Timbuktu said three rockets were fired on Sunday night by "terrorists", the word the military uses to refer to armed Islamist groups, but added that "fortunately there were no casualties".

A source from the United Nations' MINUSMA peacekeeping force confirmed the attack, which came three days after a similar assault on the northern city of Gao, adding that the rockets fell safely to the ground near the city's airport.

"It is still worrying though," said the source.

Thursday's rocket attack on Gao, which also failed to cause casualties, was claimed by the Movement for Oneness and Jihad in West Africa (MUJAO), a splinter group of Al-Qaeda's regional branch which said such attacks would continue against the "enemies of Islam".

MUJAO has also claimed the kidnapping of a team of Malian Red Cross workers reported missing last week in the country's north.

It is one of the groups that occupied Mali's vast desert region in 2012 before they were driven out by a French-led military intervention launched in January last year.