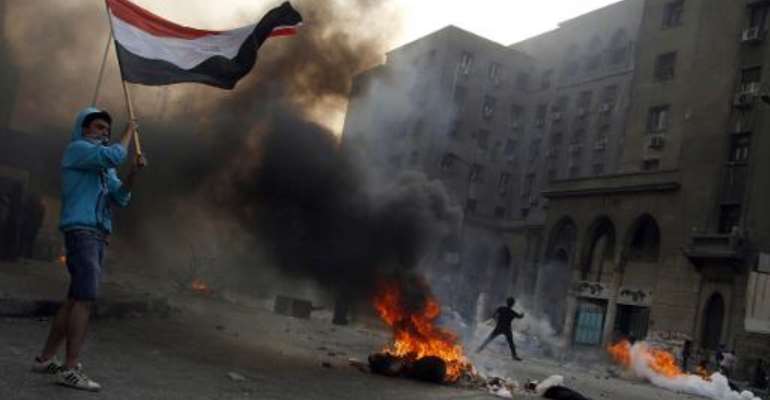 Cairo (AFP) - At least 34 people were killed in clashes between Islamists and police in Egypt Sunday, as thousands of supporters of the military marked the anniversary of the 1973 Arab-Israeli war.

Supporters of deposed Islamist president Mohamed Morsi, overthrown in a July military coup, tried to converge on a central Cairo square for the anniversary celebrations, when police confronted them.

At least 30 people were killed in Cairo, and four south of the capital, and 209 people were wounded, senior health ministry official Khaled al-Khatib said in a statement.

An interior ministry official told AFP no policemen were killed in the clashes.

Three months after Morsi's overthrow, followed by a harsh crackdown on his Muslim Brotherhood movement, the Islamists had planned to galvanise their protest movement in a symbolic attempt to reach Tahrir Square.

Sunday's death toll was the highest in clashes between Islamists and police since several days of violence starting on August 14 killed more than 1,000 people, mostly Islamists.

After several weeks of relative calm, the Islamists said they would escalate their protests by trying to rally in the symbolic Tahrir Square.

Hundreds of thousands of people had filled the square in February 2011 to force president Hosni Mubarak to resign, and again in July 2013 to urge the army to depose his successor Morsi.

But on Sunday, security forces guarded entrances to the square, frisking people arriving for the anniversary celebrations.

Elsewhere in the city, the air was thick with tear gas and the crackle of gunfire as police confronted several marches heading for Tahrir.

In Delga, an Islamist bastion south of Cairo, one person was killed when Islamists clashed with civilian opponents and police, a health ministry official and witnesses said.

For weeks authorities have been drumming up national fervour in state media, amid the worst political divisions in Egypt's recent history.

Prime Minister Hazem Beblawi urged Egyptians to unite, saying the country is on the road to recovery.

"As we go through these critical times all Egyptians should stand together, be confident and be optimistic about the future," he said in a televised address.

Morsi's opponents demonstrated in their millions in June and July to urge the army to remove him, accusing the Islamist of failing the revolution that brought him to the presidency and concentrating power in the hands of his allies.

His supporters decried his overthrow a year after his election in Egypt's first free polls as a violation of democratic principles.

Away from the main squares, Cairo's streets were largely deserted on Sunday, a public holiday to commemorate the October War, known as the Yom Kippur War in Israel.

The conflict, remembered proudly by the Egyptian army because it caught Israel by surprise, led to the recovery of the Sinai Peninsula in a 1979 peace treaty.

The interior ministry had warned it would "firmly confront" any violence or attempts to disturb Sunday's celebrations, state news agency MENA reported.

Attempts by Islamists to reach Tahrir on Friday sparked clashes with Morsi opponents and security forces that killed four people.

Analysts called the Islamists' call for protests a high-risk attempt to strip the current high command of the army's legacy and patriotic pride in the Arab-Israeli conflict.

"They will try to show that the present army is not the army of all Egyptians, but only of those who backed the coup," Hassan Nafaa, political science professor at Cairo University, told AFP.

"But this message will not go down well."

The Anti-Coup Alliance group has repeatedly called for protests against Morsi's overthrow.

But its ability to mobilise large numbers has waned as security forces have arrested some 2,000 Islamists, including Morsi himself and several Brotherhood leaders.

More than 1,000 people were killed on August 14 when security forces moved in to destroy two large pro-Morsi protest camps in Cairo, and ensuing clashes in the following days.

Islamists elsewhere in Egypt struck back, attacking police and torching churches and other Coptic Christian institutions.

The government has also been battling an insurgency in the Sinai, where militants have launched near-daily attacks on security targets.