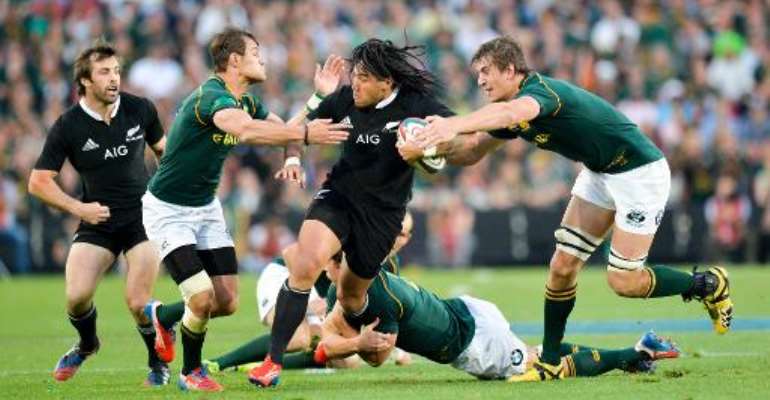 Ma'a Nonu from New Zealand (C) is tackled by JJ Engelbrecht (2ndL) and Eben Etzebeth from South Africa (R) during their 2013 Rugby Union Four Nations match on October 5, 2013 at the Ellis Park Stadium in Johannesburg. By (AFP)

The clinical world champions led 21-15 at half-time and overcame second-half yellow cards to forwards Liam Messam and Ben Franks to finish nine points ahead of the Springboks in the table.

A much-anticipated showdown between the top two teams on the world rankings, the match had everything, including a typing error.

When referee Nigel Owens queried the introduction of replacement All Blacks hooker Keven Mealamu -- a last-minute change -- the New Zealand manager came on the field and blamed a "typing error".

He did not explain how the spelling of Mealamu could be confused with Dane Coles, the original reserve hooker, but Springboks skipper Jean de Villiers was happy for play to continue.

But the lead before a 64,000 crowd did not last long as right-wing Ben Smith went over for his eighth Championship try this season.

No. 8 Kieran Read made the hard yards after the Springboks surrendered possession in midfield and Smith cut in and held off Steyn to dot down.

Fly-half Aaron Cruden converted and the All Blacks were 7-3 ahead as silence enveloped the sell-out crowd at the spiritual home of Springbok rugby.

But they had plenty to cheer five minutes later as left-wing Bryan Habana grabbed his first try after a brilliant break from No. 8 Duane Vermeulen.

The giant, blond forward surged between several New Zealand defenders before passing to Habana, who stormed over for a try Steyn converted.

It got even better for the home side just two minutes later with a forward again the architect and Habana again the try scorer.

As the men in green and gold went wide, flanker Francois Louw delivered a superb off-load, Habana kicked ahead and easily won a race to the line with Ben Smith.

Steyn watched his conversion drift wide of the far post, but South Africa had a 15-7 advantage midway through the opening half.

However, the Springboks were dealt a cruel blow on 22 minutes with Habana was forced to retire because of a hamstring injury.

A see-saw struggle took another turn when scrum-half Aaron Smith was held just short, but flanker Messam grabbed the ball and dived over for Cruden to convert.

South Africa held that one-point lead for 13 minutes in a titanic struggle with neither side gaining a clear edge in any area.

However, the opening half ended disastrously for the Springboks as they lost flanker Willem Alberts to injury and allowed Messam score a soft try.

The All Blacks ran patiently forward and across the field after the siren sounded and Messam punished several weak tackles, Cruden converted and New Zealand had a 21-15 half-time lead.

Messam was yellow carded early in the second half as the referee lost patience with the constantly infringing All Blacks pack.

And the resulting tap penalty produced a third South African try with the ball sent along the line for right-wing Willie le Roux to go over and Steyn converted.

All Blacks centre Ma'a Nonu was foiled by a superb tackle from replacement flank Siya Kolisi on 55 minutes, but substitute fly-half Beauden Barrett kicked a penalty for a 24-22 edge.

De Villiers and Barrett then exchanged tries with the New Zealand score crucial as it sealed a bonus point and the title.

Steyn missed his conversion while Barrett was successful from a much easier position, leaving the visitors four points ahead with 20 minutes left.